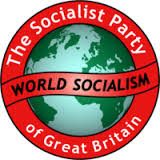 The Edinburgh branch of the Socialist Party advocates the principles of World Socialism; that is, we seek a change in the basis of society - a change which would end the distinctions of classes and nationalities. The Socialist Party aims at the realisation of socialism, and well knows that this can never happen in any one country without the help of the workers of all lands. For us geographical boundaries does not make rivals or enemies. For us there are no nations, but only fellow-workers and comrades, whose shared sympathies and mutual interests are perverted by our masters who stir up rivalries and hatreds between the peoples in different countries.
Some people try to escape the system. They try to ignore it, whitewash it, pretend it doesn’t effect them. Sooner or later life and the system catches up with them and they discover they are in a class war. Sooner or later they find themselves in a battle. And learn the importance of solidarity. We’ve got to stick together if we’re going to change things. There’s a big class struggle going on. And the question is, what side are you on?
The Socialist Party has a vision of the future. We don’t have a detailed blueprint, but we do have a theory. And we believe our theory holds up to scrutiny and is inspiring enough to offer a guide.
By ajohnstone at March 05, 2019