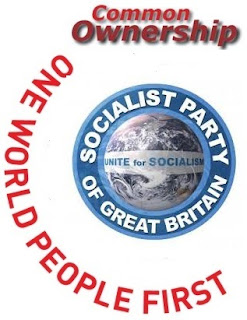 We have to choose whether capitalism with all its attendant miseries and horrors is to remain or whether we intend to be free of its wage slavery. The Socialist Party explains to our fellow workers the nature of the struggle in which they are participating. To tell them of the principles for which we work and fight. To reveal what we are confident is the way out for our class from the horrid nightmare of the competitive struggle which sets nation against nation, class against class, and individual against individual. The struggle between individual capitalists to realise profits sets employer against employer. The conflict between national groups of financiers sets nation against nation, and produces war. But despite their individual and national conflicts the whole capitalist class stands united in their common desire to exploit the working class. Hence under capitalism the freedom of the working class consists in the freedom to starve or accept such conditions as are imposed upon them by the employing class. But the freedom of the master class consists in their untrammelled freedom to buy labour-power to create profit. Thus, the workers are not free. Neither owning nor controlling the means of life, they are wage slaves of their employers, and are but mere commodities. The struggle is between the possessing ruling class, which owns the means of production, and the working class, which is subjected to exploitation and oppression precisely because the means of production are in the hands of the exploiters.


Jobs are disappearing, wiped out by factory closures, out-sourcing and off-shoring and automation. Unions have lost members and forced to submit to humiliating concessions. The social services of the Welfare State which gave some protection against unchecked capitalist exploitation have been gutted. No section of the working class has escaped hard times. Workers in industries, accustomed to relatively good wages and secure jobs, have gotten a jarring reminder of what too many other workers were never allowed to forget: that economic survival under capitalism is not something you can take for granted. Yet the economic crisis did not bring us all down to the same level. On the contrary, those who were worst off to begin with have been hurt the hardest. We hear from the politicians, the media and the economists that the recession is behind us as corporate profits soar and share dividends rise. The clear message is what working people have lost in the course of the last recession will not be returned to us.


This is nothing new. For generations, workers have borne the brunt of each economic downturn. But employers mouthpieces have been assigning blame to migrant workers, accused of “stealing” our jobs and asylum seekers getting “priority and privileged access” to social services.  Worker have raised new cries for restrictive immigration laws. Wherever we look, we see capitalists appealing to the most backward, chauvinist sentiments in the working class – sowing seeds of disunity that will spread like weeds if not vigorously opposed. The capitalist’s divide-and-conquer game doesn’t end with racist and nationalist propaganda. More and more, their collective bargaining strategies are calculated to set workers at one another’s throats with the introduction of dual contracts where newcomers or those without seniority are paid less. Instead of competing for jobs, we need unity of employed and unemployed. Instead of resigning ourselves to weaker unions, we need to organise our class. Instead of flag-waving, we need international unity and defence. We’re up against a enemies who represent different class interests than our own.


In opposition to all other parties—Conservative, Liberal, Nationalist or Labour—we affirm that so long as one section of the community own and control the means of production, and the rest of the community are compelled to work for that section in order to obtain the means of life, there can be no peace between them. We want no more promises. We want no more charity. The Socialist Party works for the building of the world anew, for the sweeping away of ignorance, for the full development of men and women, free from class exploitation, and the degradations of poverty. We don’t have an effective socialist party right now. Building one is a big job. But it needs to be done – and it is up to all workers who sense that capitalism can never provide them with a decent life or secure livelihoods to see that it happens. Decline to make your stand alongside us and by your neglect, you condone misery, exploitation, greed and war. The hour is great. The eyes of the world are upon you. The choice is yours. 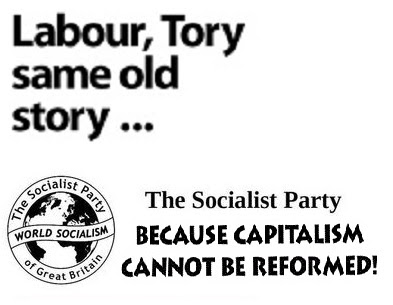