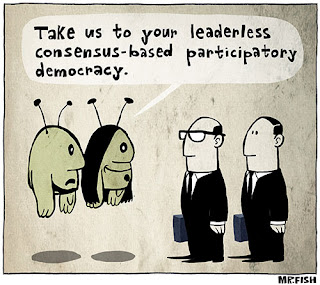 How often have you heard the plea, “What we want is honest leadership” and the failure to keep pledges blamed on “treachery of the leadership” and the need for a more “revered leader” to fulfil the promises. Leaders has always been an accepted fact in workers’ movements. For centuries it has been taken for granted that there are individuals specially marked out to be at the head of their fellow-workers. They are offered the opportunity to exercise power and are presented with positions of higher standing over those less fortunate. The idea of leadership is often put down to an inherent attribute of humanity’s hierarchy often based on some sort of biological endowment; as a proof of this we are referred to a bull lording it over his herd as an illustration.  However, one simple fact, is overlooked and it is that leadership, if meaning one who directs, controls and is followed, then it is unknown to many hunter-gatherers and tribal people.


Leadership is a form of domination. Within the working-class movement leaders lead from behind. That is to say, they can only follow the course the mass agrees to follow.


“There goes my people. I must follow them, for I am their leader.” Gandhi


While action by the mass of workers depends upon leaders and leaders depend upon masses there is bound to be this instability.


The first thing a leader must do is to convince the masses that the course he or she proposes following is the best one. Out of this arises rivalry and antagonism amongst leaders, each striving for support and building up of clique of “true believers.” This creates the intrigues and internecine warfare that plays a prominent part in labour politics. The qualities that make leaders are varied. In some cases, it is the power of their oratory, the ability to make fine speeches, in others a capacity for intrigue, and in others again, the ability for the back-room routine paperwork. A brass neck and a thick skin are also helpful. Extravagant promises impossible of fulfilment are also part of the general stock-in-trade.


It has to be conceded that leaders do not always start out with the idea of making a career or tricking their followers, although there are many who do so. What generally happens is that they gradually drift into a position where their interests are not identical with those of their followers. Leaders who have sprung from poor circumstances dread the possibility of falling back into the ranks of those looking for employment, and consequently they do all they can to keep in existence trade union and political jobs, and to hold on to the jobs they have obtained. Any attack upon the job either by erstwhile followers or budding rivals is bitterly resented. Leaders are jealous of one others' popularity.  Exclusive inner-circles develop, placing barriers around the available jobs, and a great part of the political life is taken up with this side, instead of pushing for the workers' interests. At times, where circumstances dictate it, the interests of followers are sacrificed to the interests of keeping the job. There are innumerable examples of the callous way in which many who have risen to position on the backs of followers and have then abandoned their followers for a political advancement.


In general, leaders who have “got there" favour arbitration rather than confrontation. The tendency of leadership is also towards conservatism—to keep the status quo going. Many a leader starts off as a firebrand but then gradually drifts into the “respectable” camp but gradually they do not want any disruption or seek any change in the conditions that guarantee them security, and hence they look with suspicion upon anything new. Often, they are in a better position to obtain a grasp of the situation, possessing more access to information than the rank and file, and this tends to give them an inflated idea of their own importance. Hence, they resent criticism.  The position of working-class leaders permits them to mix with a more privileged circle that was formerly unknown to them. The Red Clydesiders when they went to Parliament adopted the habits and dress of their “social betters”. They made the most of their new connections and gaining the reputation of being practical and respectable, they received the trust of those in the ruling class. Such “red radicals” without deliberate intention, lived it up and were presented with the rewards of office, expenses and higher pay. "We were the stuff of which reform is made." David Kirkwood
It didn’t go unnoticed by younger aspiring leaders, now hoping to make their own political careers. The battle-cry of the old leader is often outdone by that of a newcomer, and the popular idol of one day disappears and is replaced by another to follow the same path.


Relying on leaders dulls the critical faculties of people who habitually depend upon others to solve their difficulties. They become averse to working out solutions to their own problems. They expect the leaders to do their thinking, and when events take place that needs thoughtful action they have lost the ability. They blame the leadership for failure. Repeated failure develops apathy, and the feeling that success is impossible. The actions of leaders are limited by the outlook of the majority of the workers, it would be necessary for the majority to possess knowledge understand the position clearly in order that they might act effectively. When the majority do understand what is required they will no longer need leaders to tell them what to do. 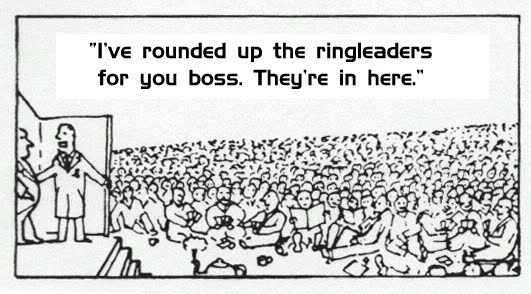