Reformism is no solution 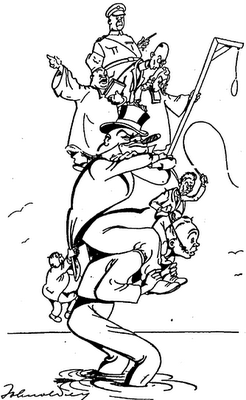 A capitalist is someone who owns capital, and through his ownership receives an income; and the capitalist system is one in which this form of ownership predominates. Capitalism is a system in which the means of producing wealth are privately owned. There have been other systems of private ownership, such as Feudalism and Slavery, but in them the wealth has not taken the form of capital. Before them again there were societies in which there was no private ownership of the means of producing wealth and no exploitation of one class by another. We say that it is private ownership which is at the root of our problems, and we propose that society should take over the means of production and use them, the only sensible suggestion to satisfy the needs of the members of society, instead of allowing a class to make a profit out of their use. Today, there is a class of poor people who have no property, and who live by working, and another class of rich property-owners, who live by owning property. The workers get wages, which they have earned by their labour. It is they who have grown the food, made the clothes and built the houses and factories, and carried goods from one place to another, and it is they who have organised this work and supervised and directed it. On the other hand, the property-owners have received rent, interest and profit without having to labour for it at all. From what source then do their incomes arise? Is it not plain that these people who own the means of production are living on the labour of those who use them to produce wealth?


At present we have the workers compelled to ask permission of the owners before they can get to work, and the condition on which permission is granted is that the workers should keep the owners in idle luxury. And this private ownership has other evil effects besides being a means of robbing the workers. We have workers producing goods of greater value than they receive back as wages, the difference being a surplus for landlords, bankers, and manufacturing capitalists. So that after the workers have spent their wages there is still a great mass of goods in the warehouses which the owners must sell before they can realise their profits, and it is much more than they can possibly consume themselves. It is in this way that unemployment is caused. The people who own the goods want to sell but cannot find buyers, while the workers who want the goods have no money to buy. Production has to be curtailed, and goods are wasted or slowly consumed by the unemployed who live on doles and other forms of relief. Alternatively, capitalist countries are forced to go to war to try to snatch markets from their rivals, and destroy their powers of production. But whether they win or lose, the problem is only aggravated.


This is the capitalist system, and we propose to abolish it. We want to destroy entirely the right of any individual or class to live by privately owning something which society wants to use. We say this results in robbery, and we are out to end it. Nobody would deny that capitalism brought with it great economic, political and social advantages, but we say that it also brought the seeds of unavoidable evils and conflicts, and that the evils are now so great that only a new and higher system can be of any use. Such a system is socialism.


Socialism will mean not only the end of capitalism, but also the end of all private ownership of the means of production and exploitation. Of course, when we talk about common ownership we are only referring to the means of production, like the land and the factories, not personal possessions and such personal things like these. There is but one course, and it is for the workers to take it. It is to end capitalism, with its absurd contradiction, super abundance, and want, coexistent, and to establish a community of interests—socialism. Socialists talk about the means of production and by this we mean all the instruments and technical know-how that man has developed for the purpose of producing wealth, from hand tools to nuclear power stations. All reformist politicians agree that these means of production should continue to be monopolised by a small privileged section of the population.


We are facing an environmental crisis. Exploitation. Consumerism. Waste. Pollution. Greed. All contribute to global warming. Poverty, extreme inequality, racism, sexism, nationalism and militarism these are the roots of of capitalism. Without fundamental changes, ecosystems will continue to deteriorate all around us. To combat climate change along with widespread ecological degradation and inequality, we need more than reformist policies. We believe the capitalist system to be the enemy. We see that CAPITALISM as the cause of most if not all of our problems, not the selfishness of the capitalists, nor the incompetence of their governments. We see that the workers are wretchedly housed and badly fed and shoddily clothed and vilely mis-educated, because they are poor. We see that they are poor because they are robbed, and they are robbed because the capitalist system is based on robbery. When we say that it is the system itself which is at fault it matter not who administers it. It will still be a system of exploitation of one class by another. If it ceases to be this, it will cease to be at all, because that is its nature. A system which is based on the robbery of the workers obviously cannot be made to work out to their benefit. We do not want anyone to administer capitalism; we want to destroy it. We say that profit-making is robbery.


To sum up, we see that capitalism is the enemy, and that socialism is the only remedy. Socialism necessarily means the denial of the right to live by owning. All who can work must work in order to earn the right to enjoy the products of labour. Socialism can be introduced only by a socialist electorate, and the present owners, as a class, cannot be expected to yield their rights until they must.


Reformers do not condemn the system of living by owning. They are not committed to socialism. Their attempts to patch up an obsolescent system of society will fail. Reforms cannot give the workers that comfort and security which alone can end their discontent, without attacking the foundations of capitalist society. Those who set their leaders the impossible task of solving the insoluble contradictions of capitalism will themselves be responsible for the inevitable disillusionment and betrayal. The issue lies in the hands of the workers. We appeal to your intelligence, confident that sooner or later, the brutal pressure of economic forces will compel consideration and acceptance of our case—the case for socialism, a society in which wage labour and the production of value have been abolished, where each person contributes what they can according to their abilities and each person receives goods according to their need. A socialist society would not compel its members to work for a wage. It would provide goods to its people for free, allowing them to fulfil their needs without having to worry about artificially produced scarcity. Production would be carried on entirely through voluntary work and would be defined by a cooperative spirit.