It’s Up to All of Us 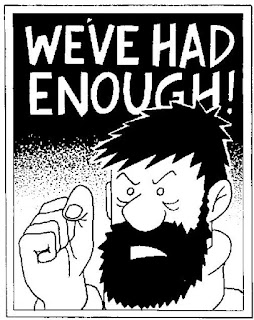 The Socialist Party wishes there was a much greater demand for socialism but the reality is there isn’t. What the capitalist system needs to conceal is exactly what we need to reveal.


We have made it quite clear that our exact aim and object is socialism and that we are socialists advocating the common ownership of all wealth production, and this involves the complete end of the capitalist system. We are working for the common good making every effort to create the co-operative commonwealth. The Socialist Party seeks not only a society in which people’s needs are provided for by an abundance of goods and better social services, but in which their full skills and talents can be fully developed. Changing the economic system is not an end in itself. It is a means of creating conditions in which human beings will be able to realise their full potentialities and work together for the common good, instead of being divided by class, sex, race or creed. Capitalism distorts human individuality, subordinates men and women to the needs of the profit system, sets them against each other. The democratic and humanitarian pretensions of the capitalist system are being constantly discredited.
Socialism aims to develop their individuality by creating a society in which exploitation and poverty are ended, and the resources of science and technology used to reduce the time spent in monotonous and mechanical jobs to a minimum, and vastly increase the amount devoted to leisure and creative work. Socialism is not a society in which the state and the government regiments the people. It is the people themselves who have to build socialism and be responsible for the development of society based on co-operation instead of domination and exploitation. In socialism the means of production would be owned in common, all the wealth they produced would be available for the use of the people as a whole, including that part of it which the capitalists now take as their private profit. Moreover, the removal of the fetters on production imposed by capitalist crisis would be removed, and the production of wealth greatly increased. Socialism would be able to meet the social needs of the people and improve the quality of life. People have everything to gain in this universal liberation struggle. The Socialist Party takes its place in the fight.
Workers cannot be organised in secret, conspiratorial organisations. They can be organised only in free and open associations. Democracy is indissolubly bound up with Socialism both a means to an end and as integral part of the final goal. We in the Socialist Party believes in real democracy, in rule by the majority with proper consideration for the interests of minorities. We believe in social democracy which is the broadest and most fair of all democracies. The Social Party declares its object to be the establishment of a system of cooperative production and distribution whereby all the means of production and distribution, to be administered by organised society in the interest of the whole people, and the complete emancipation of society from the domination of capitalism. The capitalists have failed to solve the climate question. They are unable to challenge the accumulation of capital that is the driving force this economic system. The change has to come from us the workers. We believe that workers all over the world, no matter what their nationality, have common problems and common bonds. We have common interests with the workers of other lands against the common enemy. We rejoice when we learn that the workers of other countries have had victories which improve their standard of living or widen their liberties, we sympathise with them in their defeats. We wish to spread this spirit of international working-class solidarity to introduce a system of society where industries are run not for profit but for the good of humanity.
Socialism will not only guarantee a more equitable distribution of the world’s goods but an enormous increase in the production of all that is necessary to make mankind happy. Capitalism is a wasteful, unscientific system which operates not on the basis of producing what is good for the people, but only what shows the biggest profit. Great inventions are held back or even destroyed because they would affect the profits of the capitalists, while millions of pounds are spent every year to convince people to buy what they don’t want. So once the shackles of private profit-making are removed our world will march ahead to unheard of production of goods and people’s talents, and this will provide plenty of everything for everyone, a society where each will contribute to the common wealth of society according to ability and will receive all needs without any limit. The Socialist Party is working for such a society but there are not enough of us yet to make the progress which the welfare of the workers’ demands. What about joining us? Why not become part of that Party which is working, organising and fighting for you? You will he fighting for your future as well as the future of your family, workmates and neighbours, for your community and mankind. 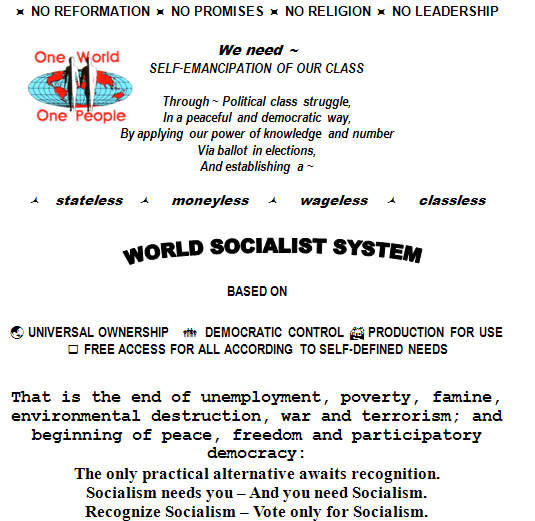