This World of Ours 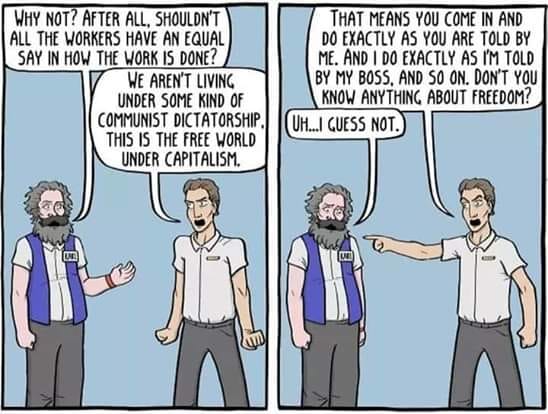 For years the Socialist Party has pleaded with the workers to organise and take over the entire means of production and distribution. The Socialist Standard, books, pamphlets, leaflets of all kinds were freely circulated, with scanty result. Unheeded, the Socialist Party faced blank indifference. It is not a question of condemning capitalism. Capitalism condemns itself. Capitalism must go is the only hope of the world. The onus is on the Socialist Party to demonstrate in a way that can be understood by fellow-workers that the theories we have so long expounded can be translated into a practical method of producing and distributing the wealth of the nation in such a way as to end forever the exploitation of the many by the privileged few


All the progressive liberal “anti-capitalists”, all of them, accept continued production of commodities for the market and for profit, the existence of an owning class and a working class, and the division of the world into capitalist nation-state competing against each other — in short, capitalism. The word, socialism, is taken to mean state ownership or government control. Their proposed policies contain a vast array of suggested remedies for the ills of capitalism —nationalisation, the development of state-operated health and welfare services, workers to sit on boards of directors, workers’ pension funds to extend their ownership of corporation stocks and seek control of corporation policy, government curbing of the freedom of action of big companies, encouragement of small companies and cooperatives, government management and planning of the economy, and so on. All these expedients have been tried and tested — with total failure. Application of all these “remedies” has not materially affected the character or operations of capitalism. Progressives not only support capitalism, even strengthen it by reforms, but also sees state capitalism as “socialism.”


Socialists are not looking for a saviour but for their fellow workers to join them in a movement which is understood by all, controlled by all, and in the interests of all — Socialism. It is not enough to say one is a “socialist” to be one. One must advocate the revolutionary abolition of capitalism and refuse to work for its reform, in order to wear the label of "socialist.”


What is apparent in elections is the extent to which all the parties try and manage the agenda for the election. They all want to encourage the debate to be round the handful of high-profile “flagship” issues where they feel on strong ground. The assumption is that voters are stupid and can only remember 3 or 4 things at a time, so why give them more than that to consider.


What it all means is that the campaign may centre around a handful of issues only. That may appear to appeal to the Socialist Party. After all we are the ultimate single-issue party - Abolish Capitalism. But while this is a single issue no-one is pretending that it is a simple case. Sure, it’s not complicated, the case for putting human need ahead of profit, but simple soundbites don’t do our case justice. We in the Socialist Party are also handicapped in the eyes of the modern voter by the fact that we are not in a position to make promises, and what’s more, we aren’t going to “do anything” for anyone. The other parties are falling over each other to be seen to be offering some immediate palliative. The Socialist Party advocates the abolition of buying and selling and money and wages. We want the replacement of the system where production is geared to profit, by a system where production is based on self-defined human needs. We're talking about a world community without any frontiers. About wealth being produced to meet people's needs and not for sale on a market or for profit. About everyone having access to what they require to satisfy their needs, without the rationing system that is money. A society where people freely contribute their skills and experience to produce what is needed, without the compulsion of a wage.


In the admittedly unlikely event that the Socialist Party was elected, we would very probably (i.e. as we are a democratic party it wouldn’t just be up to the newly elected MP to decide) give our support to a reform demand which we felt would advance the interests or conditions of the working class. But it is reasonable for us to not want to allow this to divert us from the mandate we would have been elected on, to push for a world where the satisfaction of human need is the first and last and only consideration of society.

It's tempting, in the absence of any real alternative, to get drawn into the phoney war that is political debate today. Whether Labour, Tory, nationalist, Lib Dem or whatever they all spout the same promises. But it always amounts to the same thing-they offer no alternative to the present way of running society. Do you really think who wins an election makes any difference to how you live? And do politicians (whether left-wing, nationalist or right-wing) actually have much real power anyway? OK, they get to open supermarkets and factories, but it's capitalism and the market system which closes them down.