Our only real future lies with the working class in its fight to end the foul system of capitalism. Our survival is to put an end to the present system of capitalism, where the first and last issue is profit. Profit and more profit. Today profit rules, not the needs of the people. Capitalism is a system where those who have ownership of the factories, the mines, the mills, the land they sit on, the machines, and so forth have everything. It’s a system where those who have no other way to make ends meet except to sell their ability to work to the bosses, must labour to enrich the capitalist, and can work only so long as they do so. When the capitalist finds no further use for a worker, when he finds it unprofitable to continue paying his workers, the wage slaves are thrown out into the streets as additional figures on the unemployment lists. Under their system, democracy is for the rich, justice is for the rich, a good education is for the rich, and medical care is based on your credit-rating. The Socialist Party is an organisation which would help get rid of this system, and build socialism where the people’s needs will be in the first place, a political party which firmly states it is socialist and stands with the working class, and that the only road out of this hell is socialist revolution for class-free society.


Unemployment, dead-end jobs with lousy wages, discrimination, terrible schools, the constant threat of another rich man’s war and the continual destruction of eco-systems. These are some of the problems we face. Partial “solutions”, a few piecemeal reforms, never has and never will end these conditions, and it doesn’t answer the most basic problem people face under capitalism–that it is completely unable to offer them a life with a purpose. Years in a factory or some other job making some capitalist richer, or devoting their life only to raising a family and house, fighting to stay ahead of debt and with nothing their children except life in a system based on exploitation and oppression. This is the future the ruling class offers us, and what we have to look forward to in the years ahead so long as the capitalists’ rule. The only solution to this most basic problem is to overthrow the existing system–a revolution. The Socialist Party recognises that to wipe out this mad-house system requires not piecemeal reforms but one major thorough-going solution - revolution.


For most of our lives we have been preached to about the horrors of socialism, in the schools and colleges, in the media, from the lips of lying politicians. But who, or better yet, what class has been doing this; what class has been trying to poison our minds with anti-socialist venom? And what has been their purpose in doing this? It is none other than the rich ruling class, the source of all exploitation and oppression. It is the same class of people who try to present their system, where the masses of people catch hell each and every day, as the best of all possible worlds. They tell us it is natural for some people to be on top of other people. They say the best thing in the world is looking out for Number One (yourself), and to hell with everyone else. After all they say, that’s just the way it has to be. The ruling class hates socialism, they say it’s bad for the people. For the ruling class it is indeed bad, because socialism will end their blood-sucking ways. For the people, on the other hand, it is the beginning of a new era. It is not hard to see what the motive lying behind the anti-socialism is. The capitalist class has about as much interest in promoting the spread of socialist ideas, as a rat has in the spread of rat-traps. Under capitalism the workers are wage slaves, slaves of the bosses. The bosses run the factories in order to maximise profits. This means that they pay workers as little as possible, that they do not hesitate to maintain unsafe working conditions to save a dollar, and poor quality products are purposely produced in order to increase profits. History has shown that these conditions are always present under capitalism, and cannot be eliminated as long as there is boss-rule of the country


Throughout the world people are being screwed over in a thousand and one ways by the capitalist system. A capitalist has to exploit his workers in order to survive as a capitalist. Are we to fight the capitalists individually? First of all, in industrial battles that in the short run mainly affect one group of the people, think how much the strength and power is increased when all the people take them up. the most important thing for people to understand is that the only way to do away with the misery and oppression which capitalism breeds is to build a united and organised movement against the capitalists and for revolution. If is the task of the Socialist Party to go further and point to the broadest and biggest fight of all: that against the capitalist class for control of this 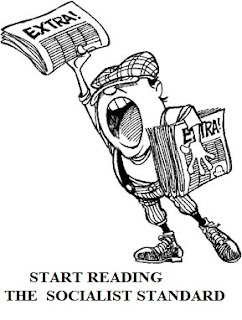 society. We don’t look for friends among the ruling class. Instead we support the daily struggles of the working class by promoting unity and solidarity, publishing the Socialist Standard that tells the working ’class side of the story, and working towards the revolutionary overthrow of the capitalist class.
By ajohnstone at March 02, 2019