Capitalism IS the problem 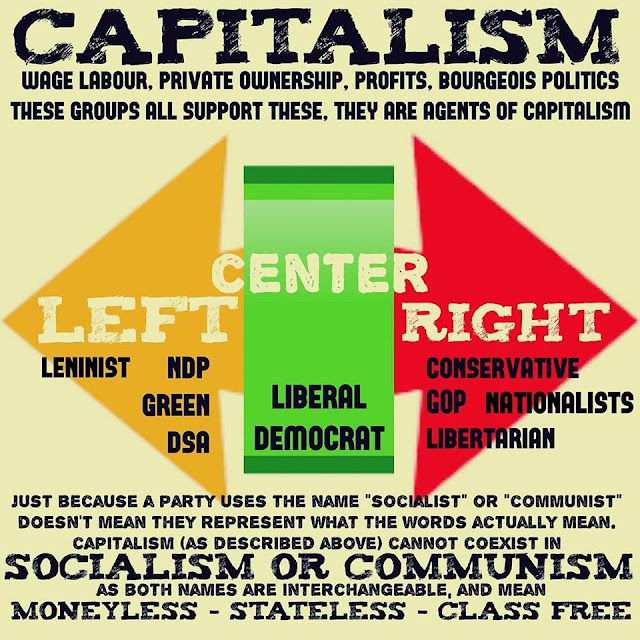 The real enemy of the working class is, and always has been the capitalist class of every country and the system of wage-slavery it represents. Workers must grasp the real meaning of the facts presented to them, and find and apply the only remedy or once again pay the penalty for allowing a privileged class to direct the course of events. They must recognise that they are the producers and distributors of the wealth of the world, but an idle class lives on the results of their toil because the workers allow that class to retain the ownership and control of the means of wealth production although constitutional means are at their disposable to dispossess that class.

Poverty, hunger and war are not caused by human frailty, but by the greed of capitalists for profit. When the population of the earth owns in common the means of production the product of human labour will be distributed to each according to the needs of each. Then no one will make a profit out of another’s labour and the scramble for markets will disappear. This is socialism, and it is for this alone that socialists are struggling. When the workers have made up their minds to build a socialist society, and have set about doing so, the ills of capitalism will disappear.

The world is divided into two classes—those who own, the capitalist class, and those who are property-less, the working-class. The capitalists live on income derived from ownership and the workers live on wages obtained by selling their energies. The income of the capitalists arises from the unpaid labour of the workers and exists in the form of rent, interest and profit. This income cannot be obtained until the goods produced by the workers are sold. Control of markets, sources of raw materials, spheres of influence and control of strategic military areas are among the factors essential in the competitive struggle between capitalist powers. The struggle is fierce and although disputes are settled sometimes by diplomatic means, ultimately the decision rests on the weight of the armed forces of the rival powers. Force is the final arbiter.

The Left scorn the idea of socialist propaganda and jeer at our insistence on the need for socialist understanding. They guide the healthy discontent of workers into political activities harmless to the capitalist system, but dangerous to the working-class. Workers need not accept the blind and stupid policies of the left-wing leaders; they can hammer out a policy independent of the capitalist parties. The strength of the capitalists rests on the political ignorance of the working class. Growing socialist knowledge amongst workers will rob the capitalists of their strength. When large numbers of workers understand that whether they are British, Chinese, American, European, they have a common interest in the abolition of capitalism, the capitalist diplomats will be unable to come to the defence of capitalist interests. Our immediate task is to make socialists and the conditions for propaganda have never been more favourable. Capitalism is still torn with suffering.

Socialism has come to be associated with any activity of the government or municipality in an economic direction, irrespective of the nature of the activity. Hence any industrial or commercial enterprise undertaken by a governmental body is labelled socialism nowadays. The mere form is here confounded with the content. Mere State involvement does not mean socialism. The State is mainly an agent of the possessing class and any economic undertakings by governmental bodies largely run in the interests of that class.  Their aim is to show a profit, in the same way as ordinary capitalist enterprises. This profit goes to the possessing class in the form of relief of taxation, mainly paid by them, interest on loans, etc. In other words, the government economic activity is for-profit and not for use and their employees are little, if at all, better off than those of private employers.

If we look around, we find many benevolent and useful institutions established by many or by the whole people in common. In one place associations are formed, for instance, the lifeboat institution, to rescue and save shipwrecked persons; at another place, the community erected a school or medical clinic. In life, everybody cares for oneself, but people also unite for advancing a common, social purpose. Experience teaches that they do admirably well; every one of us must admit that our own welfare is greatly advanced by such mutual cooperation. What would people be without community? We should be in a terrible situation if we didn’t work together for shared practice and lightened one’s load among many. We could mention here a thousand other common institutions will be sufficient. Now all these are nothing but socialism. For socialism is nothing but the principle of the common interests of society. Without socialism, there will be no fundamental changes. There will be and must be, worsening of all the old problems of capitalism and insecurity more threatening. Who declares oneself an enemy of socialism declares oneself an enemy of common interest, an enemy of society and mankind. Socialism has its origin and root in public welfare.