Socialism - Not bread and butter but strawberries and cream

Governments running a system concerned above all else to ensure that rent, interest and profit are secured for the capitalist minority are bound to anger and frustrate workers. After all, workers have no real material interest in capitalist prosperity; indeed, the capitalists' privilege is obtained at the expense of our relative poverty.

In Britain, the richest ten percent own more than half of all the accumulated wealth and just one per cent own more between them than the poorest eighty per cent.

There is a class division arising out of diametrically opposed material interests. Faced with a multitude of problems arising out of the system where production is for profit rather than need, workers become frustrated, angry and determined to do something to change things. Socialists depend on this active desire to change society: every worker who decides to do something to protest against the way things are — however misguided that action might be — is, at least, proof of the fact that workers are discontented and not brainwashed. After all, if workers were wholly contented and totally indoctrinated, there would not be any socialists.

Socialists stand in uncompromising opposition to reformism. We reject all attempts to make capitalism run efficiently from the working class point of view. That does not mean that we have nothing in common with reformist workers — in fact, we have much to agree about. They want change and so do we; they envisage the possibility of eradicating unpleasant features of society which conservatives say are inevitable, and so do we; they are anxious to alert their fellow workers to particular problems and so are we. Where is the big difference, then? Socialists are aware that the changes which reformists want are futile for three reasons: firstly, they are usually directed to just one problem of capitalism, leaving all the others intact and, even in relation to these "single issues”, the reformists are often willing to compromise (abolish nuclear bombs, but keep conventional ones, for example); secondly, the reformist is unaware of the fact that capitalism produces social problems as a matter of course, and that therefore it is as idealistic to seek to eradicate mass starvation without ending production for profit as it would be to abolish the spots without curing measles; thirdly, socialists want more than to make capitalism tolerable for the working class — we want to end capitalism and, in so doing, to abolish wage slavery as a permanent social condition for the vast majority of people.

The reformist answer to the case for revolution — it will have been going through some of our readers' minds as they looked at the three reasons we have stated for opposing reformism — is that, whatever its limitations, at least the reformists are doing something. Indeed, they are; they are voicing their frustration and that is no bad thing. But a man with a toothache who expresses his frustration by sending a petition to the optician is doing no more than diverting his energies from the practical solution which is to be found in the dentist's surgery. Of course, workers who are mugged and demand that the government publicly flogs criminals are doing something, as are women workers, who, feeling oppressed, conceive of liberation for them as the oppression of men by women. Wrong solutions to real frustration arising out of real problems will not change society.

It is true that many reformist actions alert workers to aspects of capitalism which need to be exposed.   But we must expose futile waste of energy on illusory attempts to change society, because the need to end a system which threatens to blow us all up is more important than humouring the naive sentiments of self-righteous reformists. Workers have nothing to gain by engaging in protests which stop short of confronting the social system as a whole; half-loaves will not satisfy the appetite which most of us have for the best society can produce. That is not to say that socialists oppose reforms or that we deny the usefulness of reforms to certain workers — often at the expense of other workers. Our argument is not that workers would be better off without reforms, although we would certainly be better off without many of them. Socialist understanding starts off with all the recognition of the problems and all the anger about them which reformists show.

Our opposition to capitalism is not academic, but is based on material experience. The answer staring us in the face is that we are living in a world which organises itself on the basis of producing goods and services with a view to profit. World capitalism forces workers’ needs to be secondary to the purpose of making profits so that capitalists can stay rich. In short, production for profit is at the root of virtually every modern social problem. (Of course, there are natural problems, such as earthquakes, which neither reform nor revolution could eradicate.) The socialist response is to make the one revolutionary demand to abolish capitalism and, in so doing, to carry out the job which all the separate reformist protesters are trying to do — but to complete them all in one fell swoop.

Socialism and nothing less is the object of the Socialist Party. But as we have been advocating this for a very long time, are not reformists entitled to tell us that the failure of the revolutionary movement to win over a majority of workers is as much a demonstration that we are wrong as is the failure of reformists to achieve their limited aims? The answer is that socialists are not criticising reformists because they have failed to win support — on the contrary, millions of workers have been attracted to the slogans of reform; our disagreement with the reformists is based on the fact that, even with mass working class support for their aims, they have failed to change society in such a way which leaves them with no more reforms to enact. Indeed, the essential problem about the reformist strategy for change is that it envisages no prospect that the problems will be solved and reforms will not be necessary. In this sense, reformism presents the working class with a never-ending operation of gradual improvement to a fundamentally rotten structure. Socialism, on the other hand, has never been tried and has never had support from millions of workers. We are not able to force workers to be socialists, and we would not wish to do so if we could, because only conscious men and women of the working class who want socialism will be able to establish the new social system.

There is no certainty that workers will turn their attention from attacking the effects to abolishing the cause. But workers do inevitably learn from history and it is to the lesson of revolutionary success which the experience of reformist failure must lead. It is. therefore, to workers who have swallowed the illusions of partial change, and have become disillusioned, that socialists present the case for fundamental social change. Instead of banning nuclear bombs, let us ban every weapon from the face of the earth, by removing the cause of their existence. Instead of pleading for better let us demand the best. And to those who, with a sneer, tell us that they have no time for such grand aims because they are engaged in bread and butter politics. we respond that they are free to demonstrate for their bread and butter but we social revolutionaries will not be content until we have the strawberries and cream. 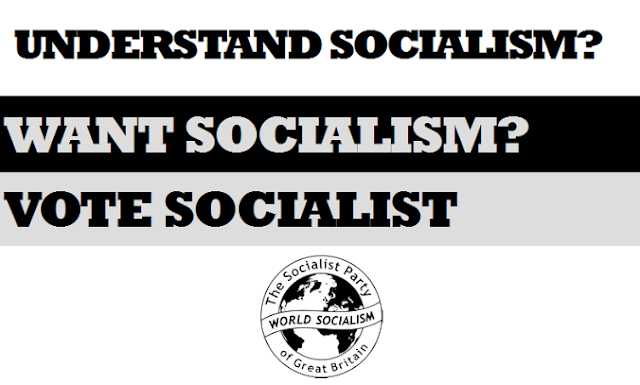