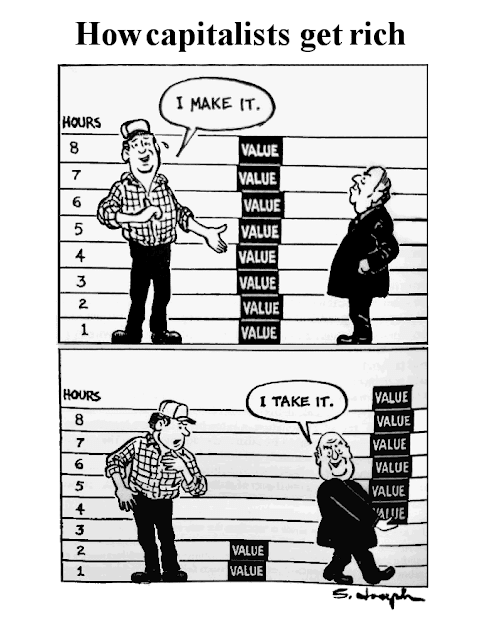 The capitalist makes nothing out of idle factories or rusting machinery. New wealth, including machinery itself, can only be created by labour. And it is a portion of this newly created wealth that the capitalist keeps for himself. It is legal and just that he should do this under a capitalist system with capitalist laws.

He pays dollar for dollar for everything he gets. He buys according to the labour worked up in things. He buys labour-power in the same manner. Then he sets his labourers to work. And he sells the things workers produce dollar for dollar according to the total labour worked up in them. He has paid the workers the value of their labour-power, or enough for them to live on. But of course not the value of what they have produced.

The source of all capitalist wealth – rent, interest, dividends – “profit” – is the surplus the workers produce over and above what they get paid – the difference between the wages and the product. This is called by Karl Marx “surplus value.”

The appropriation by rulers of the surplus product was not invented by capitalism. Assuredly the ancient slaves produced surplus-value, say the capitalists’ professors. “And of course the serfs of the middle ages did.” Each of these serfs worked about four days on his own miserable land and two days on his lord’s. He had to perform unpaid labour and so create surplus value. The capitalist professors acknowledge that.

“But today” they exclaim – “Why today the worker is paid wages for every day and every hour in the day. He works for himself, not for the capitalist!”

If these wise gentlemen saw thirty brand new cars an hour whiz down the assembly line as they felt their muscles get sore, they might think otherwise. But it is quite true that we work for so much an hour in the plant. The hourly wage conceals the systematic robbery of the workers by the capitalist and helps to give it legal justification.

It is very obvious that the feudal serf was performing unpaid labour a couple days a week. There he was working on the lord’s estate without wages – without a return of any kind.

The wages system seems to give a return for all work performed. We look back upon the feudal serf system and think the serfs were an awful gullible bunch of fools. It’s so clear to ‘us now that they were just making the lords rich all the time, working on their land for nothing, as they did.

We are working part of every day and part of every hour and minute for nothing, regardless of the testimony of time- cards and professors. We are working part of the time “for ourselves” and part of the time for the company. Suppose we are producing new value at the rate of two dollars an hour, and get paid just one dollar an hour – then we are working just half the time for ourselves and a half for our “lord” – the company. All the man-made wonders of the world are monuments of surplus-value. Capital itself is that part of the surplus-value which is put back into production. It is the surplus-labour of the past that is turned into new machinery to exploit new labourers. The harder the workers labour, the more they produce, the more surplus they produce – then the more capital they produce. Capital is dead labour that lives “vampire-like on living labour.” And under capitalism, the completed surplus-labour – the dead labour – returns to haunt the living labourer in the form of a machine that makes him work faster, produces more surplus for the boss while he produces himself an early grave.

Under Capitalism and capitalist law, this is just the way things should be. “To them, that hath shall be given.” Under Capitalism, the capitalists have every right to all their riches. They have every right to own the means of production even though the whole world should starve. The surplus product belongs to the capitalist. The working class can only take this surplus by rooting out capitalism itself, by changing the laws of society and establishing socialism.

The wealth of the rich is made up entirely of surplus values produced by the poor. All profits, rents, interest, dividends, etc., are produced by the working people. They all come from the surplus over and above their own food, clothing and shelter, which workers also produce.

For one rich man, there are many poor. And so, the argument is often heard that none of us would be much better off if all the wealth in the world were divided “evenly.” The whole point is that socialism would not just divide up the wealth, but would increase the production in order to divide up the things that are produced.