We live in a fearsome and threatening world with all these signs of a society gone mad. The peoples of the world go about their daily business, seeking to forget or ignore the grim dark shadows that hang over their lives. But capitalism will not allow them to forget or ignore its terrible realities. Some would deny that we live in a world of potential plenty and claim that the cause of world poverty and hunger is natural scarcity. That, in other words, some people starve simply because not enough food can be produced. Why in a world of potential plenty is so elementary a human need as food neglected for so many people?  In the present state of scientific knowledge and productive techniques, enough food could be produced adequately to feed the whole population of the world. The cause of hunger and malnutrition must be sought not in any lack of natural resources but in the way society is organised. It is this anarchical world market system of artificial scarcity and organised waste that is responsible for poverty and hunger in the world today. The law which governs production everywhere is “no profit, no production”. This means that if there is no profit to be made from producing and selling a good then that good will not be produced, even if people desperately need it. The present system of production is geared only to meeting profitable market demand. Their very real human need for food is not “effective”, to use the jargon of business, so they are badly fed and, in many cases, starving to death.

In the midst of an impoverished world, booming with wealth and productive power we possess the potential for abundance. But presently the ecological degradation of the planet helps to enhance the profit-making powers of the capitalists. Even the wealthiest capitalist nation cannot satisfy the basic needs of its working people, decent housing, adequate food and healthcare. So long as the rich continue to coin profits out of the sweat and blood of the toilers, they do not care how many are out of work, go hungry and homeless, and lack all hope for the future. Only a clique of capitalists stands in the way of abundance. The workers have to wrest control of the factories and other major means of production from the hands of the employing class and establish their own control over industry and society. Production for profit must be superseded by production according to a unified plan determined by the needs of the entire people and directed by the associated producers themselves. This is the socialist remedy for capitalist chaos and misery. Only socialism can transform our world into a secure and peaceful one.

"The common heritage of all mankind” is a phrase applicable to the treaties about Antarctica and the Moon. These treaties declare that no state can establish territorial rights nor any individual private property rights over these areas — that, in other words, they belong to nobody. What is required is that this same principle should be extended and applied to the whole globe: all that is on the Earth should become the common heritage of all humanity. On this basis, there would be nothing to prevent the world’s people from organising the production and distribution of wealth simply and solely to satisfy their needs as individuals and as a community. Production would no longer be restricted by the law of “no profit, no production” nor any longer governed by the blind economic force which the world market represents. Instead, it would come under conscious, democratic social control and be oriented to what after all is its only rational end — satisfying human needs and wants. In these circumstances, production could be rapidly increased to levels that would ensure that every man, woman and child on this planet was adequately fed, clothed and sheltered. The mass hunger and deaths from starvation that characterise the world today would remain only as bad memories of what no doubt will be commonly agreed to have been a barbarous past. The Earth is the common storehouse of all humanity; the production of wealth solely for use not sale or profit; a world without arms — is this an unrealistic Utopia? Not at all. It is the only logical and rational way to run the world given the present high stage of development of the forces of production. Because a solution is so simple and obvious does not mean that it won’t work. 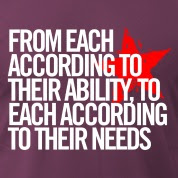