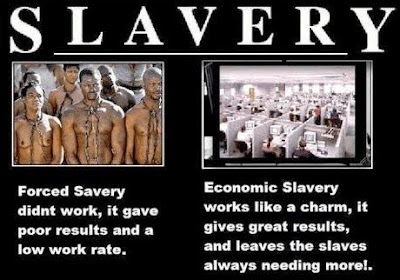 Homo homini Deus
Man is a god to man

For the capitalist, the aim of production is not to produce goods to exchange and to use, but instead, it is a compulsory drive to accumulate capital through exploitation – simply put, to make more money. The capitalists own the means of production; the people live at their mercy, depend on them for the means of life, and are in fact wage-slaves.

Once money becomes the aim of production, labour-power has to become a commodity. In other words, a worker’s labour-power can be bought and sold. Besides the fact that people must be legally free–that is, not slaves owned by others or serfs tied to the land – the labourer must have lost all means of production and thus all ability to produce either for consumption or exchange for himself. An example of this is peasants being driven off the land. Labour-power as a commodity is the necessary complement of the private ownership of the means of production by the capitalists.

Only by buying the worker’s labour power can the capitalist make profits. Workers produce more than what the capitalist pays them in wages and benefits. This is the basis of exploitation of the workers. What the workers produce over and beyond the socially necessary labour for keeping themselves and their families alive and working is surplus value. Surplus value is the only source of profits and is ripped off by the capitalists. Under the system of non-possession of the working class of the instruments with which they work, all progress, no matter what its nature, is turned against them, making greater their misery, their slavery; accentuating the insecurity of their existence; in a word: making unavoidable their exploitation—their robbery. The basic premise of socialism is that this robbery by the capitalist class drives workers into revolt against the system.

Today’s economic system is built upon conflict rather than cooperation. Competition between the worker and the capitalist for their respective shares in the produce; on one side, wages, on the other, profits; each side exerting itself to carry off a maximum. Strive between workers and workers for the sharing of wages and to capture a job. Rivalry between capitalists and capitalists for the sharing of profits. Land-owner versus banker versus industrialist.

General insecurity becomes the normal condition of society. Capitalist society has proved its dismal failure to produce anything from a superabundance of resources except misery and suffering. The class struggle does not have to exist.

With socialism, solidarity is the basis of society. Any thought to organise the immense and still growing power of technology to meet human needs does not even enter into the capitalist’s heads for such a policy cannot arise within the conditions of capitalism. Only socialism can sever the bonds of capitalist property rights and organise production to meet human needs. Once capitalism is overthrown, then and only then can production be organised in common for all, and every increase in production bring increasing abundance and leisure for all. This is the aim of the socialist revolution – to destroy the power of the capitalist class, to dispossess the capitalists and organise social production. Only the socialist revolution can cut through the tangle of private property rights and conflicting interests that fetter the growth of production. First, the political expropriation of the capitalist class today, then the economic expropriation tomorrow. The state is torn from the privileged class and becoming, in the hands of the working class, the instrument of its emancipation and social transformation.

All the members of a socialist society are at once with equal title the co-proprietors and co-producers. The State, in the oppressive sense of the word, will cease to exist, it being nothing more than a means of maintaining artificially, by force, order that a system of society, founded on the antagonism of interests would naturally give birth to. The government of men and women gives place to the administration of things. Social harmony and universal peace shall prevail. Commercial production of exchange-values with an end to realising profit will disappear, and be replaced by the co-operative production of use-values for consumption with a view to satisfying social wants. In place of robbing and exploiting one another, we will all help one another. By perfecting automation, technology will provide so much more leisure or well-being for both for ourselves and the community in general. Daily drudgery will disappear and vastly reduced working hour will be sufficient to provide for the material wants of all, especially added to the robotics works are those employed in jobs of a destructive nature (armaments) or socially useless (sales).

Democracy provides the means of accomplishing our will and therefore of satisfying our wants. The first necessity is the working-class conquest of power. Without power, no change. But what do we mean by “power”? Do we mean simply a change of government? No. What is in question is not simply a change of government on top, but a change of class power; since our purpose, is not simply to carry through one or two legislative measures, but to change the whole class-direction of existing society. At present the capitalist class rules, whatever the form of government or what party holds office.