The alienation of workers 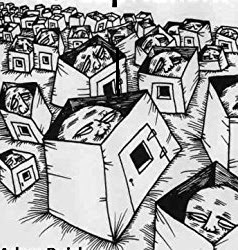 There exists an anti-working class prejudice peddled with no evidence other than anecdote and encouraged by the capitalist class since Victorian times that divides workers into 'deserving' and 'undeserving' categories. The real scroungers are the parasitic capitalist class.

The capitalist class does not produce any wealth, they steal it from the surplus value, created by wage-enslaved labour. Their capital when they invest is 'dead labour' already plundered. They are collectively economic parasites as a social class, in a system designed for their continued dominance. The working class is collectively the only useful class as they produce all wealth. Many of those workers presently unemployed or in poor health already worked and in many cases, their health is a consequence of their previous occupations. Things cannot be allowed to improve for the poor, how else will they submit into waged slavery and how else will profit be derived for the parasite capitalist class?

Those who are unemployed, they constitute a 'reserve' which will always exist, it keeps wages lower, also as the capitalist class may need them in any economic upturn, although they will not give the Right to Work'. It is a better deal for the capitalist class to pay unemployment benefit and welfare in general than to provide enough wages for the workers to afford insurance or to face a social revolution.

Time for an end to wage slavery. The last great emancipation is that of the working class. Time for a societal upgrade to an elite free, democratic, post-capitalist, production for use, free access society, owned and run by us all as part of truly equal humans.

Government bail-outs are nothing to do with 'socialism'.  Government bail-outs are state-capitalist measures in the interests of the capitalist class as a whole, even especially when they are pitched as and seem to be, helping workers. For workers, there is always a sting, whether to dampen wage demands (family allowances) or fob off social discontent (welfare state). They are ultimately a good deal for the capitalist parasite class and can be clawed back if profit erosion occurs.

Socialism does not exist and has never existed. Any top-down direction in capitalism is state capitalism. Socialism is a post-capitalist society.

The contradictions of life under capitalism have engendered deep-rooted feelings of frustration. The wealth pouring from the factories and the farms has not assured many of prosperity nor offered security about the future prospects. Instead, of an expected welcome release from burdensome toil, the prospects of automation and robots have become a source of anxiety, producing the threat of chronic unemployment and the spectre of a new recession to follow, rather than the promise of peace and plenty. No wonder people feel alienated.

The most pressing need facing humanity is to progress from the anarchy of capitalism to a post-capitalist society. The price to pay for delaying this task will be more poverty, increasing hunger, mounting disease, and continuing wars. To these has now been added the climate change and global warming which could make all the higher forms of life extinct.

Government only exists to run the affairs of the capitalist parasite class, however, they are organised, in state capitalist dictatorships in the absence of a domestic capitalist class, or otherwise. No government can do any more than govern over us in the interest of extracting profit from the exploitation of waged workers, for the benefit of a minority capitalist class.

The working class always vote against their class interest when they support any of the political parties of capitalism, whether allegedly Labour, or unashamedly Tory and misguided Leftist Leninism/ -state Trotskyism. (nationalisation = capitalism). Capitalism cannot be reformed in the interests of the working class. There is no benefit in the working class changing their support from one set of politicians to another. Capitalism is not like some benign country estate and it cannot be organised as if it were. It cannot put human welfare in the forefront of its concerns. It cannot be controlled by any leader or expert. It must produce problems like poverty, sickness, and war. Workers who are seduced into thinking that things would be different under a government of less abrasive personalities are deluding themselves. Western democracy is a choice between the same outcomes, government over you and social control of you for the benefit of the rich.

Tax is a burden upon the capitalist class. Your wage is the bottom line. If the nominal tax figure in your salary or wage check was abolished, your wage would be reduced by the same amount.

Taxation is a way of adjusting the bottom line so workers without dependents do not get the same wage (ration) as those with dependents. The other way is in work so called benefits wage subsidies for employers.

Incoming fellow workers are not stealing jobs. The enemy is the employer class.

“The comfort of the rich depends upon an abundant supply of the poor.” ― Voltaire