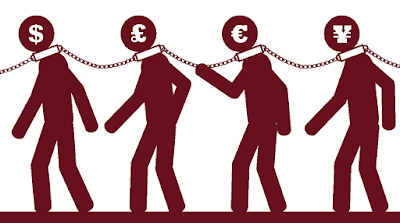 Is capitalism really broken, and is there anything we can do to fix it?
The World Socialist Movement’s purpose is to promote the establishment of a socialist society to replace the current capitalist system.

What is the difference between capitalism and socialism?
Capitalism is a world economic and social system where the means of production (land, factories, etc.) and the distribution of wealth are owned and controlled by the capitalist class. The basic unit in this system, the commodity, must be sold for a profit to pay rent, costs, and produce the necessary capital to be reinvested to accumulate more capital. Workers are forced to sell their labour power to the capitalists, who then extract the surplus value (i.e. value the workers put into a commodity over and above the wages they receive).

Thus two classes are formed, the capitalists who own but do not produce, and the workers who produce but do not own. Socialism is also a world economic and social system, but one where the means of production and the distribution of wealth is based on common ownership and democratic control and is operated in the interests of society as a whole.

Socialism will be a world without states, classes, or money; where production will be to meet human needs, and everyone will have free access to all the goods provided by society according to their self-determined needs.

Why should we change a system that works?
For the vast majority of people in the world, capitalism does not work. Wars, disease, starvation, and poverty continue unabated year after year. Basic human needs are not being met because capitalism by its very nature must choose profit over people. Without profit, capital cannot be accumulated and the system would fail. Thus, human needs can be met only if you are able to pay for them. That’s why some 15 million people die of starvation and malnutrition-related diseases every year, even though we are quite capable of producing enough to feed everyone. We even destroy food and pay farmers not to produce food to keep prices and profit high. Capitalism is also why many millions more die of easily treated diseases when we have an abundance of the necessary medicines. Starving and sick people who are unable to pay for food or drugs simply don’t receive them. You may look upon this as evil. We see it as the normal functioning of the capitalist system and the reason we want to replace it.

But hasn’t socialism been tried and failed? Doesn’t the USSR prove socialism/communism’s failure?
The word socialism is probably the most misrepresented in the English language. Many groups, parties, and countries have called themselves socialist. That does not make them so. If you look back to our description of socialism, you will clearly see that we have never had a world economic system without states, without money, without classes, where production was owned by and for the whole of the population: not in the Soviet Union, China, nor in Cuba. Our party stated in 1918 that the Bolshevik revolution was not socialist but rather state capitalist. Certainly, the socialist society that we promote has never been advocated by the world’s Social Democratic parties.  Despite what the capitalist media would like you to believe, socialism has never been tried.

Can’t we simply work to improve the system we already have?
There are hundreds of organizations, such as Greenpeace, and various anti-poverty groups, full of well-meaning people who want to change capitalism for the better; to make it a responsible system that works for the benefit of all. They have not understood the true meaning of capitalism: that everything must be sacrificed to accumulate capital— workers’ rights, human rights, the environment, your grandmother’s medical treatment, and anything else that impinges on profit. For the last 200 years or so that capitalism has been the dominant economic mode, we have fought innumerable battles for better working conditions, more pay, improved social programs. We have won some of them, only to see our hard work legislated away when it became politically expedient to so.

Despite our best efforts, we still have the capitalist system and we still have its unacceptable exploitation and abuses that we had at the beginning. We call the endless drive to make capitalism better reformism. We would spend our time, energies, and resources educating people to establish socialism rather than waste time in the false belief that our present system can be made to work in everyone’s interest.

But isn’t reformism working? Aren’t we better off than we used to be?
Many people around the world are worse off than in former times. Many countries who have fallen under the guidance of the World Bank, World Trade Organization, and International Monetary Fund have been forced to give up local economies that could at least provide the bare minimum. They are coerced to restructure in the interests of the capitalist class, using valuable land to produce cash crops for export. The proceeds are used to pay off huge debts that never go down. The results have been disastrous, invariably bringing greater poverty and gutted social services. Some of us in the so-called developed world have better living standards than our parents and grand-parents. By most projections, we may be the last generation to be able to say that. Recent studies point to an exponential growth in the gap between the capitalist and worker classes. In other words, we’re getting a smaller and smaller share of all the wealth we produce.

How does the WSM differ from other socialist parties?
There are many groups/parties out there who use the name “socialist”. Many of them believe capitalism can be changed incrementally into socialism. They are generally referred to as “Left- wing”. We believe the Left wing and the Right wing are both parts of the same bird: capitalism. Other groups want to suddenly replace capitalism by a military or violent coup led by a small group who will later convince the rest of the population that they need socialism.

We promote a peaceful revolution, taking control of the existing political system democratically only when the vast majority of the people understand socialism and make a conscious choice for it. We are the only party working for our own demise, as there will be no need for political parties when we achieve our objective.

The WSM does not have leaders, as leaders imply followers who are told what to do. Rather, we expect everyone to be able to promote their ideas in a democratic forum. We base our arguments, objects, and principles on a scientific understanding of society, and we have maintained the same principles since 1904.