Is Capitalism a Mad System? 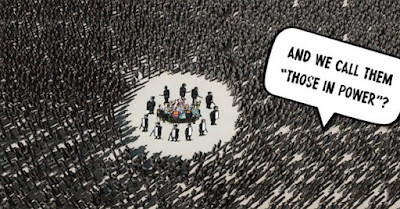 No rational, objective person could look at our world and say that it is perfect. In fact, only a few seconds contemplation would be needed to conclude that we have massive problems such as war, starvation, dire poverty on a large scale, and impending ecological disaster on a global scale. If we were tackling these problems seriously and making progress, we might be satisfied with what we were doing but these very same problems have existed for decades and longer, proving that we are not taking them seriously. That they continue to exist amid plenty and the means to solve them is inexcusable, if not sheer madness.

Capitalism has brought incredible productive power to the human race but we can clearly see that it cannot deliver adequately. Capitalismʼs apologists continue to tell us that we must wait for the ʻtide to raise all boatsʼ but, obviously, some boats ride high while the majority flounder; they tell us that the victims of starvation or poverty are themselves to blame as they have too many children or do not work hard or smart enough. But the deprived world is an integral part of the capitalist system and has been from the beginning – it supplies the natural resources and cheap labour needed to create high profits.

Thousands of manufacturing and technology companies have not left North America and Western Europe for the cheap labour World and abandoned their ʻpatriotic dutyʼ for nothing. It pays well. The operative word is PROFIT. In the capitalist system, a company cannot deliver goods to those who do not have money. They must do without even for necessaries such as food and medical drugs to sustain life. The coercive laws of capitalism mean that one company cannot give an edge to a competitor by giving away product to the needy and foregoing profit. In fact, to operate properly, producers must attempt to balance supply and demand, must manage the flow of goods to the market so there is enough to meet effective (paying) demand but not too much to create a glut. Too much product, i.e. enough for everyone who really needs it, and the price will drop; keep the supply scarce and the price will rise. In manufacturing, lines of production and whole factories are brought into play or shut down at a momentʼs notice to keep this balance.

This means that food is often left to rot, grain locked up in silos, and product is destroyed to prevent flooding the market.  Is this madness, or what?

The futility of reform is phrase is familiar to members of The Socialist Party and our companion parties in The World Socialist Movement. We hold that you can spend an immense amount of time, money, and energy on one issue and if you are successful, you will realize the very next day that there are thousands of other issues to deal with – poverty, minimum wages, workplace safety, pensions, benefits, health-care, unemployment, welfare payments and disabled payments and so on. It is also likely that you will have to settle for something much less than you initially worked for.

In addition, benefits given can, and often are, taken away by the giver. This last fact is very obvious in the present recessionary times. Attacks on wages, benefits, and pensions are on the table everywhere. For those who have lived through it, the loss of our gains from the fifties, sixties,and seventies is most disturbing but for socialists not altogether surprising.

Probably the worst aspect of a reform program, though, is the loss of a socialist consciousness. The goal tends to get lost in the struggle for one issue. This has gone on for so long that many, especially those so-called workers’ organisations, no longer understand what that goal is. The main object of any movement concerned with those issues above should be to remove the root cause of all of them – capitalism and replace it with a society that is controlled by the majority and works for everyone – socialism. All single- issue campaigns attack just one aspect of a vast and complex system of producing and distributing wealth.

The slogan ‘people before profit’ implies that as long as they get a few crumbs thrown their way, the profit system will continue. Can people really come before profit? Will capital really take less or no profit to keep unproductive plants in operation just so that the workers can continue to receive wages and benefits? Of course not!

At the first whiff of higher profits elsewhere, capital flies out the window and the plants shut down. And this is a very necessary action in a profit system driven by the exigencies and competitive laws of capital. Will a few pennies on the minimum wage, more taxes on the rich to fund more health care, pensions, etc. do the trick?  Where’s the long-term gain? The loss is to the promotion of socialism. That the class consciousness and knowledge of socialism is lacking and their thinking and actions flawed is obvious from the fact that they haven’t yet realized that it is the profit system as a whole that is the cause of all woes we have to endure and therefore nothing less than replacing the whole system with one that is controlled democratically by the majority in the interests of all will address the problems.

Of course, we must all speak out, demonstrate, and demand our right to a decent living. At the very least, it brings attention to the worst aspects of capitalism and may win some benefits, however, small and fleeting. But to expect this tactic to make capitalism work for all is like trying to hold back the tide. Capitalism was designed to work for the capitalists and it’s working very well, thank you, very much. The capitalist class will use every excuse and tactic to minimise wages and benefits in order to maximize profits and a recession is a handy excuse to do that.

The only answer is for the world’s workers to take control, through legal, parliamentary methods where possible, and establish a system that works for all humanity, i.e. the common ownership of the means of producing and distributing wealth, free access to all to satisfy their needs, and production for use, not profit. Capitalism is an insane system
By ajohnstone at November 27, 2016