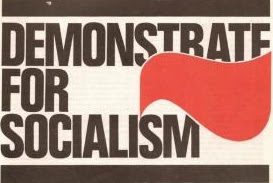 The word socialism means many different things to many different people and it is used in many different contexts in the media. No wonder there is confusion. We are often asked what our platform is (establishment of a socialist society), are we Trotskyists (no), Leninists (no), and so on.

The interpretation of socialism runs the gamut from the sublime to the ridiculous so it may be appropriate for us to investigate its meaning as far as we are concerned. Some see the Left Wing agenda as socialist, i.e. fighting for reforms such as raising the minimum wage, lower student fees, taxing the rich to pay for social programs etc. Obviously, the deduction from this is that there will always be student fees, minimum wages, and the rich. While we are happy to see the working class get any advantage in living conditions, we see that reforms will never bring us closer to a socialist society and reformers accept that capitalism is the only game in town.

To us, the Left Wing and the Right Wing are but two wings of the same bird – capitalism. In other words, both are part of the current destructive system. Some see unions and their activities – collective bargaining, work-to-rule campaigns, strikes, the struggle for better pay and conditions – as part of socialism.

While we agree that unions are a necessary institution for fighting against the worst excesses of capitalism and that they benefit the working class under capitalism, they do nothing to create a revolutionary activity, promote socialism, or any alternative to capitalism and, over time, they have been drawn closer and closer to accepting capitalism. In “Value, Price, and Profit, Marx wrote on unions: “They ought to understand that, with all the miseries it (i.e.capitalism) imposes upon them, the present system simultaneously engenders the material conditions and the social forms necessary for an economic restructure of society. Instead of the conservative motto, ‘A fair day’s wages for a fair day’s work’ they ought to inscribe on their banner the revolutionary watchword: ‘Abolition of the wages system!..Trades Unions work well as centres of resistance against the encroachments of capital. They fail partially from an injudicious use of their power. They fail generally from limiting themselves to a guerrilla war against the effects of the existing system, instead of simultaneously trying to change it, instead of using their organized forces as a lever for the final emancipation of the working class, that is to say, the ultimate abolition of the wages system.”

Unions, then, are not revolutionary, they react to capitalism’s actions, and they are specific to their members, favouring one group of workers over another group, such as their members over workers in other countries, rather than taking a world-view of the class struggle.

Some people and the media see socialism as the central planning of the economy by the state government. This would include the nationalization of some major industries on the premise that if it belongs to the state, it belongs to the people. This would also essentially describe what occurred in the former Soviet Union and what is happening today in so-called socialist countries like Cuba. China, as is obvious, has abandoned even this pretence of this particular brand of socialism and opened its doors to capital investment from abroad although the ‘communist party’ remains firmly in control of the country.

Nationalisation was used as a tool to keep the economy running smoothly with the necessary services to capital that the capitalists couldn’t do for themselves. Massive undertakings in roads, railways, health care, shipbuilding, steel production, coal mining, and other aspects of infrastructure were often too big an undertaking for the capitalist class in the late nineteenth and early twentieth centuries. It was difficult to raise the capital involved for the project and the risks  were enormous. In effect, the state was minding the service until agglomerations of capital became big enough for privatization.

Since that time, most nationalized industries have been privatized or are under heavy pressure to do so. A nationalized industry is run like any other business – capital is advanced, raw materials and labour hired, and a commodity produced and sold at a profit, thanks to the theft of the surplus-value of the workers. Like private industry, the workers have no say whatsoever in the production process, do not own any of the commodities produced, and work at the pleasure of the owners, in this case the state. Workers must bargain collectively with state officials and often have to go on strike to preserve the gains that they have made previously. Throughout the twentieth century, beginning with the Russian Revolution of 1917, several countries declared themselves ‘socialist’ and were/are run by so-called communist parties.

The parties of the World Socialist Movement, and many other analytical Marxists around the world, soon saw that these revolutions were simply bourgeois in nature, transferring power from the landed aristocracy to the new elite that functioned as a capitalist class. All revolutions were carried out by small groups snatching power, i.e. were undemocratic, and forced on the majority who did not understand socialism. Police forces, secret terror organisations, and the army were needed to maintain power for the minority. Their economies were set up like those in the capitalist countries but run by the officials of the state, the ‘communist’ parties.

Some politicians and political parties brand themselves or are branded by the media, as socialist. They are all simply vying with all other parties to run the capitalist system, to become its executive council. Some may genuinely want to improve conditions for the workers, but only in the context of the exploitive system that produces profits and enriches the minority from the unpaid labour of the workers. The New Democratic Party in Canada and the Labour Party in the UK, among many, started out with the idea of replacing capitalism with socialism. Both have dropped that idea, have concentrated on small palliative reforms, and rightly take their place among the pantheon of capitalist parties at election time.

Then there is the truly ridiculous. US president, Barack Obama is frequently described as a socialist by his opponents, particularly over his minuscule amendments to health care. He has never hinted, by word or deed, that he is anything of the sort. Newt Gingrich, positioned about as far away from socialism as you can get, was called a socialist by his opponent, Mitt Romney, for saying, “If we identify capitalism with rich guys looting companies, we are going to have a very hard time protecting it.” Gingrich had accused Romney of plundering floundering companies, tossing workers onto the street, and personally pocketing $250 million as head of a successful private equity firm. No further comment necessary!

So what is socialism?
To us, socialism means the common ownership of the means of producing and distributing wealth, democratically managed in the interests of all mankind. That means the land, the resources, the factories, the transportation systems, would all be held in common and managed by democratically elected councils. It means everyone stands in the same relationship to production – no owners and non-owners, no employers and employed, no class system. Everyone would have access to decent shelter, food, education, health care and all other necessities of life. It would mean production for use, not profit, free access for everyone to the goods and services they need. All this would be accomplished with voluntary labour. Imagine, we could produce durable, quality goods with clean energy, practice real green initiatives and devise ways to clean up the environment, use scientists to further the progress of mankind instead of producing military hardware, and so on, because we, the people, would decide democratically what should be done. No more bosses, no more leaders telling us what needs to be done when we already know, no more media lies to obfuscate the truth.

Can it be done realistically?
Yes, because we, the workers, do everything now and don’t need anyone to tell us how to do it. It must be done only when the vast majority understands what socialism is and vote for it. Getting to that point will be the hardest thing yet achieved in human progress but we are convinced that if the truth is presented to the world, it will be accepted. A socialist system has never existed but it is obvious that it is the next step forward in human progress and is not only worth working for, it’s a necessity.

Capitalism
1. A class-based society
2. Minority private ownership of the means of wealth production and distribution.
3. Production and distribution for profit.
4. Access to necessities of life by economic demand i.e. by your wallet.
5. Two classes – those who own the means of production but do not produce, and those who produce but do not own.
6. Employment – employers employ workers as they need them, workers sell their labour-power
7. Markets (buying and selling) for most goods and services, including labour
8.  Activities necessary to support the profit system, e.g. banking, insurance
9. Emphasis on competition
10. Leaders and followers
11. Mostly hierarchical organizations giving and taking orders
12. Periodic elections to choose professional politicians. Government over people.
13. Nation states, armed forces, wars
14. Education and health care for those who can pay
15. Crime (mostly property), a legal system to uphold private property rights
16. Environmental problems (pollution, global warming) caused by the manic drive for profit

Socialism
1. A society without classes
2. Common ownership of the means of wealth production and distribution
3. Production to meet human need
4. Free access for all, each determining their own needs
5. No classes – all people stand equal relation to the means of wealth production
6. Necessary work – all those fit enough volunteer their services as preferred and needed
7. No buying, selling, or exchange - only giving and taking.
8. Work for necessary and useful production
9. Emphasis on democratic co-operation
10. Participants meeting on an equal basis to make decisions
11. Mostly lateral organizations (co-operation between equals).
12. Elections as required to choose representatives or delegates. Administration of Things.
13. No nation states, no armed forces, no wars.
14. Education and health care for all, as needed.
15. No property crime, any residual crime (against the person) dealt with humanely.


16. Cleanest technology for production for use, not profit.
By ajohnstone at November 15, 2016