The battle for emancipation 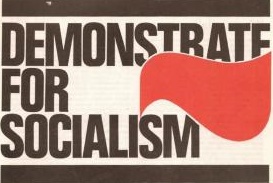 It is part of the task of the Socialist Party to show that, with the exception of that single factor, working-class knowledge, the material conditions for the social revolution are ripe. It is now time for our fellow-workers step in and dethrone the capitalist class by gaining control of the State. They must capture the political machinery by the workers organising themselves into a political party, having for its object the overthrow of the present social system and the establishment of a system of society based upon common ownership of the means of living. Thus organised they must wrest control of the political machinery from the ruling class by means of the ballot, and having achieved this control, must use it to strip the capitalist class of their possessions, and consequently of their privileges. The vote is to be the weapon. A vote is something more than a cross on a scrap of paper. The value of the vote is measured by the man or woman behind the vote. It is not the elected representative who is the all-important factor, but the quality of the vote which puts him into place. Thus the votes cast for the revolutionary representative must be revolutionary votes. They must be the votes of those who understand the need for revolution, desire it, and are determined to achieve it. An MP elected by an informed constituency is its servant. Understanding the position, they are able to direct his course of action, hence they are his masters. If he plays them false, if he departs from the revolutionary path, they know it at once and seize the first opportunity of "dealing with him. On the other hand, such a representative knows that in all sound revolutionary action he has the full support of those whose delegate he is, and hence becomes the strong and efficient servant of a strong master. The representative of those who do not clearly understand what it is they want who gets his votes on all manner of vague pretexts and promises he dares not attempt to take a revolutionary course, whatever his views may be, for he has all sorts and conditions of persons in his following except revolutionaries and  the revolutionary does not follow. Such a representative is in a position to sell his electors. Depending upon confusion for his place, his best chance of maintaining it is to preserve that confusion. This suits the capitalists very well, for their chief concern is that the workers shall not know who their enemies are. Therefore, the political parties of the capitalist class welcome such representatives of labour—they know there is no revolutionary force behind them.

The first quality, then, of revolutionary vote is to have a working class that thoroughly understands its position in society, that thoroughly realises the hopelessness of any endeavour to improve materially that position under the present social scheme, and that therefore is thoroughly resolved to abolish the system and establish Socialism; the crying need, then, is knowledge. The first thing that the workers must learn is that there is only one working class and that their interests are one and the same the wide world over. Then they must learn that, just as the workers are made one by a common interest, so a common interest; binds the capitalists of the world into a solid class. The realisation of this teaches the lesson that the interests of the workers and the capitalists are diametrically opposed, for this follows from the fact that it is interests that divide the people into classes. The logical implication of this is that the workers must proceed to work out their emancipation as a class. This means organisation-—the closest, the highest, most perfect organisation possible—organisation on class lines.

The political organisation of the working class, having for its object the establishment of the socialist system by a politically educated working class, must first of all be an instrument capable of fulfilling its purpose. It must, then, be firmly anchored to its object so that it is impossible for it to drift. The first thing needed, therefore, is to be clear in what the object is because the party seeking working-class emancipation can only gain its object through men and women who thoroughly understand what that object is. Those who hold that it is the 'leader’ who is the source of power are, of course, quite logical in adopting an "object" that will appeal to the greatest numbers. In such a case all that is wanted is shoulders to climb upon. The ' leaders being the strength of the organisation, it is quite sufficient that they understand the object of the organisation—the others do not matter. The case is very different with a democratic organisation. The first principle of such is that it is the workers as a class who must fight the battle for emancipation; it is they who must be strong since their servants and delegates can be strong only with their strength. The logic of this is that the fitness of the organisation for its purpose depends upon the quality and strength, not of ' leaders’ but of the membership.

Those who want office, who are  determined to get our feet on the floor of the House of Commons and are not particular how we do it" (because that is all they want), claim that the emancipation of the working class does not need a revolution. The reason for this is easily seen. The only way in which they could get their feet on the floor of the House of Commons to-day is by denying the need for revolution. Revolution and the class struggle, of course, are necessarily connected. The "gradualist," therefore, in order that he may get his feet on the floor of the House of Commons with the help of non-socialist votes, is forced to deny the revolution because that implies recognising the existence of the class struggle. Those, however, who realise the facts of the political situation, know that the workers would not be driven to seek emancipation but for the class antagonism; hence they are driven to accept the class struggle as the very basis of their action. Members of the Socialist Party can never become the plaything of leaders and dictators. The first sign of compromise, the first indication of alliance with the enemy, the first particle of evidence that a member has become the tool of any section of the master class, and he is dealt with by a membership imbued with the principle of the class struggle.

Consider the following facts:
The first is that terrible poverty exists among the workers to-day.
The second is that the productivity of human labour, have increased enormously during the last 500 years, the bulk of the workers, in view of the vastly increased production of wealth, are poorer to-day than they were in the Middle Ages.
The third is that this poverty is worst when the warehouses are full to bursting.
The fourth is sufficient wealth is produced to-day to afford comparative comfort to every member of the community.
The fifth is that the work of producing and distributing that wealth is performed by the working class.

Are these statements true? If they are, then all that is required; is that working-class intelligence, courage, and determination shall rise to the height of seizing control of society and remoulding it to the end that the general happiness and well-being shall be the sole purpose of all productive effort. If they are true they impose upon every working man and woman the serious duty of giving thought to these matters; for it is from them alone that the remedy can come. The salvation of the working class involves the overthrow of the master class, therefore it is futile to look for help from the latter.
By ajohnstone at November 19, 2016