ONLY SOCIALISM CAN CREATE A SUSTAINABLE WORLD 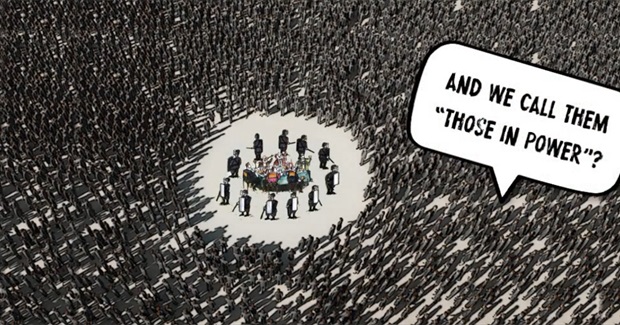 Socialism does not require leaders as this implies followers, but would rather have decisions made in a collegial manner with input from all through elected councils and other methods. Leaders have led the working class into fighting and dying in wars to allow one capitalist group or another to have unfettered control of resources and markets for hundreds of years, and have not advanced the cause of the working class one iota. Better we get rid of such leaders and work for a society that is communally administered and everyone is great.

The Socialist Party do not waste their time protesting the effects of capitalism but point out that all the social evils created by it can only be abolished by the removal of the cause, namely, the ownership of the tools of production by a privileged minority, and the consequential enslavement of the majority, in other words, the capitalist system itself. Furthermore, we advocate clear- cut tactics conducive to its abolition i.e., a socialist minded majority organizing to capture political power so that the whole apparatus of capitalist administration can be removed and socialism established. The only occupation we advocate is that of elected socialist representatives of the people occupying, however briefly, the citadels of power the capitalists now hold. So why not join us and have done with protests that are not reinforced with political action.

No tinkering with the economy has solved the problems of the capitalist system. Many reforms (or, if you will, good laws) have been enacted to make life under capitalism a bit better off for the working class. To a considerable extent, this is a sham. Such laws can later be abolished, diluted, not monitored, ignored by the government, and, in the following examples, ignored by those whose interests they clash with. Throughout the world, we have seen free enterprise, state capitalism, and mixed economies. We've seen wars we were told would secure us a better world. We've seen reforms that promised the earth and still the world is in a mess. This shows clearly that only a society where production is for use can make the population of the world prosperous and secure for all. This does not prove, though, that the great dream is dead. It is fact very much alive - as a nightmare!

Our left-wing critics often say, 'You in the SPGB are correct in your analysis. You show clearly that the problems facing humanity can only be solved by the abolition of capitalism and its replacement by a society based on common ownership and democratic control. However, you show that you do not know how to achieve that goal. When you advocate electing a majority of socialists to parliament with a mandate to strip the capitalist class of its property ownership, you are being idealistic. There is no way the capitalist class is going to sit back and do nothing while you vote them out of existence.

We then ask of our critics how they envisage going about to establish a socialist society and we receive a variety of answers.
One is, to quote a phrase, 'To the barricades!' In other words, an insurrection. Our response is as long as parties committed to the running of capitalism control parliament, then they also control the armed forces who will crush any revolt with the sanction of legality and such rebellion can only lead to disaster.

A second idea is a general strike. By this they generally mean a strike of industrial blue-collar workers, however, today this only comprises a minority of the work-force. The employers would have a lock-out, and starve them back to work.  Another related tactic is that espoused by the Industrial Workers of the World, (or Wobblies) and which is that of industrial unionism that argues you can capture power through industrial action. They are all oblivious to the fact that the capitalists, through control of the parliament, can use the armed forces to disperse workers who are on strike or evict them from their factory occupations. When one views history when industrial unionism was at its height, one can clearly see it failed because the capitalist class, through its control of political power, had the upper hand. When the majority in a factory was IWW members, they functioned the same as pro-capitalist unions, asking for higher wages and shorter working hours. It takes no great feat of analysis to realize that for a union to be effective, it must embrace within its membership workers from every possible school of thought and is, therefore, ineffective as a revolutionary agent to establish socialism. Some suggest co-operatives, islands of socialism in an ocean of capitalism. But if profits, wages, buying and selling still exist it means that instead of a capitalist cracking the whip, the workers were doing it to themselves.

Socialism will not come until the majority understands what socialism is and organise politically and consciously for its establishment. Once a socialist-minded majority has captured political power, it then controls the armed forces and police. That means first that the troops will not be used against the workers, and second, that they will be used against a minority that attempts to overthrow the will of the majority.

Our critics say that if a socialist victory in an election looks likely, the capitalists will suspend the ballot or introduce a law to abolish it. Though this could happen, the working class could very easily set up their own ballot and present it as a fait accompli. The problem all our critics suffer from is they think in terms of minority action. This is the result of believing that the majority of the working class will never become socialists, which we dispute. We have seen many minority actions crushed or wither away ineffectually. What we haven't seen is our critics change their tactical vision or lack thereof. What should be obvious is that when the vast majority says, 'let's have done with capitalism' and translate it into action by voting a majority of socialists to parliament, there will be nothing the capitalist class can do about it. The powers of coercion will have been taken from them.
By ajohnstone at November 29, 2016