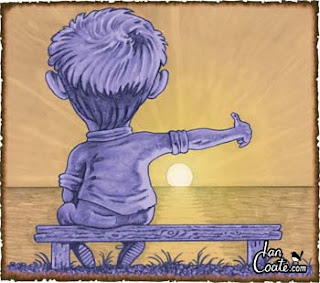 I’m breaking up with my invisible friends. Of course, it’s always right and proper to do these things face-to-face, but unfortunately it’s not possible in this case as they are all, well, invisible. Anyway here goes…

Dear God,
Sorry, but I’m breaking up with you. They told me all about you when I was young and you sounded like a really decent guy – and really smart too. All those amazing things you did? Wow! But when I grew older I couldn’t see you anywhere. I couldn’t find any evidence of you or your intervention anywhere. People I know who did everything you wanted had terrible lives, or even suffered cruel, untimely deaths.
The world you created was teeming with problems, yet all you wanted people to do was to adore and praise you. WTF? You could have sorted all this stuff out in seconds, but you didn’t bother. So I reckon either you don’t exist at all, or maybe you’ve just moved on to your next project and aren’t interested in us any more. Either way, it’s over for us, because I’ve found something much better.

Dear Country,
I was born here in this country and everyone I know makes out like it’s the best place ever. They wave around coloured pieces of cloth, sing songs about it and say that the country beside us is no good, but I was there once and it looks just the same to me. In fact, I travelled around the world quite a bit and saw that everywhere is much the same. It’s all just land with people who all pretty much want the same thing – to live happily and in peace.
Sometimes our country’s leaders decide to go to war with another country and loads of their people and our people get killed and injured. Why? Because they wave a different colour cloth and sing different songs? Sorry, but that’s fucking bullshit. What century are we living in? These leaders are picking fights in our country’s name without even asking us, then sending some of us off to kill or be killed? I don’t like that, so let’s just drop the whole country thing, shall we – then they won’t be able to do this to us any more. My country is just a piece of land, divided from some other piece of land by an imaginary line drawn by some dead guy. Sorry, this makes no sense to me any more, so no, it’s over. I choose to be a free citizen of the world, thank you.

Dear Money,
I loved you all my life, yet you were always trying to get away from me. Was I too possessive? LOL. You were my light. The spark that drove me on to try and succeed. Then one day I noticed that you only seemed to have any value when people believed in you. The less people believed, the less you were worth. That’s crazy. I thought. If money was real, its value would never change, right?
Then I heard about all the big problems in the world ‘cos some people don’t have enough money, or some have too much and it makes them all go a bit mad. They do crazy things like destroy forests and rivers to make more money, or they attack and hurt other people to steal it from them. But it’s all just for a bunch of numbers written on a computer?? You know, like 4,235,987,520,987,859,876,530,948,755,349,875. People tell me that we all have to work and sacrifice our time to make these numbers. Why? People help each other all the time without exchanging numbers, so that’s bullshit.
These numbers only mean something when we all believe in them. If we stop believing, they vanish. That means it’s not real. Sorry, but I don’t want to spend my life running after something that’s not real. That’s a total waste of my life. Anyway I found something much better…

Dear World,
You rock! Hey in fact, you are a rock! And that’s what I love about you: you are REAL. You are big and blue and beautiful. Your animals are fantastic, the oceans are incredible, and your air so fresh and exhilarating.  Your people are wonderful, peaceful beings with immense creativity, warmth, love and laughter. I love this place. I love it because it’s real. It’s solid, strong and full of amazing things.
When I was younger, we had some childish ideas about things that people told us mattered a lot – that our time in the world was just a test for another better world – but I never saw it and, to be honest, I don’t want to. I love it here, now.
They told us we had to live in between certain lines and act differently within those lines, but I never saw any lines, nor could see any real difference between people on either side. All I could see were good people, land, sea and open skies.
They told us we had to use a numbering system and that everything had to have a value, including our time. That’s so limiting I thought. Look at all the amazing things we could do if we didn’t have to put a value on it? We’ve got all these incredible brains, only to be limited by a crude scale of scarce numbers? Haha, no thanks, I think we can do a hell of a lot better than that.

I loved my imaginary friends, for a while. But, well, it’s time to move on now and get real. Goodnight.