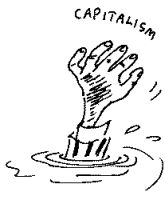 As anyone can clearly see, the world is heading closer to the brink of environmental disaster brought about by the rapacious and ruthless nature of capitalism. In these disturbing times, it is refreshing to see movements appear and spread globally, saying, in effect, 'There must be something better than capitalism.’ Many are beginning to realize that it is pointless getting rid of a government and putting a new one in power if its intention is to continue to administer the system for the benefit of the ruling class. These revolutionary ideas cannot be stopped at borders and they don't need leaders. So to those people, we say that socialism, common ownership of the means of producing and distributing wealth, production for use, not profit, free access to all humanity to the goods our society produces, will solve our major problems. Take a look at our case and act. We are working for a society where there is no such thing as a capitalist class or a working class. The basics of capitalist society are that the working class produces the world's wealth that the capitalist class legally steal and apportion the loot out among themselves in the form of fat-cat dividends, CEO salaries, share options, and bonuses. The only answer is a society where production is for use, where all may freely partake of the world's wealth, and money, in any form, does not exist.

Capitalist society teaches everyone from birth to shun that which is different. It's a case of 'hate him, he's black, or white, or has long hair, or short hair, is a Protestant, a Catholic, a Shiite Muslim, a Sunni Muslim, a Jew, an immigrant, an atheist, and so on.’ The list is endless because there are millions of specific and superficial differences, but they all have one common denominator - that at a given time and place this person or persons is different to the rest and therefore deserves to be attacked in one way or another.

By the above, the capitalist class, whether it be part of the secular or religious authorities, achieves two objectives. They create pressure to conform and give protestors someone to blame when the going gets tough. As socialists, we believe that these differences are superficial and should not divide the working class; that, a member of the working class i.e. anyone who sells their labour-power for a wage or salary, has more in common with the worker anywhere than a capitalist who lives in the same country.

The fact that the reaction to hard times in Pakistan has taken the form of religious differences is further testament (no pun intended) to how the capitalist class everywhere strives to maintain ignorance among the working class. Religion, which is another word for superstition, is something people cling to when it seems all hope has gone. As Marx said, 'Religious suffering is at the same time an expression of real suffering and a protest against suffering. Religion is the sigh of the oppressed creature, the sentiment of a heartless world, and the soul of soulless conditions. It is the opium of the people. The abolition of religion as the illusory happiness of men is a demand for their real happiness. The call to abandon their illusions about their condition is a call to abandon a condition which requires illusions."

Socialists, too, are divisive. We divide the nonsense from the truth. Nothing but a socialist society can save the world's population from the disaster it's heading into. We stand on the cusp of financial and environmental collapse and quarreling amongst ourselves prevents organizing to avoid it. Nor can one blame the capitalist class for their lies that perpetuate capitalism. They are driven by economic conditions, just as the working class is so driven.

There is only one answer to intolerance, genocide, destruction of the environment, food and water shortages, preventable diseases, poverty, and war, and that is the establishment of a socialist society. So why not study the case for socialism now and organise for its arrival and a world organisation that is capable of tackling those problems.
By ajohnstone at November 30, 2016