How poor are the Scots?

Of the £714bn of wealth held by Scots at the start of this decade, the wealthiest 1% of people owned 11%. In other words, just over 50,000 people lived in households where wealth amounted to nearly £80bn. Half of households in the least wealthy group were headed by somebody in work.

The wealthiest 10% of households owned 44% - more than £300bn - while the least wealthy 10% owned little or no wealth. The least wealthy 30% owned merely 2% of the total. It is only above that level - households which are above the bottom 30% - that wealth begins to accumulate, a little. Home ownership begins to have an impact, so the least wealthy half of Scots owned 9% of the total. The least wealthy 30% have almost no wealth held in homes, and the share rises from the fourth decile, getting much steeper for the wealthiest 10% of households. You can be wealthy, by owning your own big house, while having a low income (typically, a single retiree who didn't move out after the kids left). Or you can earn a lot while renting your home.

The property market in the south-east of England is the main explanation of the average Scots household having £186,600 average wealth while the average household across the whole of Britain had £225,000. It was south-east England that pulled up the English figure, at £342,400.

Physical wealth, or belongings, was more fairly spread about, though the wealthiest 10% of households owned 33% of it, and the least wealthy 50% had amassed only 20%.

27% of people have no source of pension other than the state pension.

The wealthiest tenth had amassed 55% of the nation's total pension pot, while the bottom half had less than 3%. (This does not include entitlement to state pension.) At the risk of bamboozling with numbers, the top 10% had 964 times more saved in pensions than the bottom 30% of households. 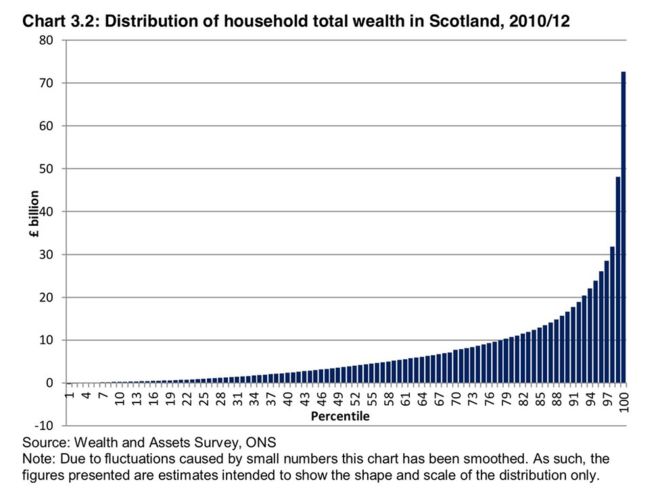