We can make socialism work 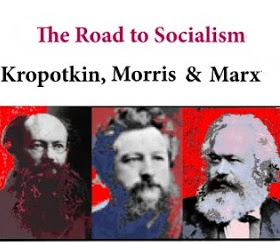 Change is coming. Hundred of millions of people, young and old, from all over the world are now demanding change. Most people are already vaguely aware of this but they just don’t have a shape or form for it yet. They know something or other is coming but they don’t know what. We do. Their consciousness will catalyse into new sharing socialist economy.

‘You can lead a horse to water, but you can’t make it drink’. No-one is going to agree with our ‘crazy’ socialist ideas until they can see it for themselves. For most people, seeing the common-sense logic of a money-free society is counter-intuitive to everything they have been taught. It takes time. Introducing socialist ideas and the very concept of a money- and wage-free society may create a sufficient question mark in their minds for them to seek more information. Socialists often say ‘well, if we didn’t have capitalism, we wouldn’t have that problem.’ Nevertheless, we are fully aware that questioning someone’s political beliefs, can be personal. These beliefs are part of their personality, their way of life, so an attack on their beliefs is an attack on them and is very often resented.

First, we try to persuade people to entertain the very idea of a world without private property, no money, and no wages. We have to explain that people will still do things without money even performing tasks they wouldn’t particularly like to do. We point out that greed is only borne of scarcity and is not human nature as some would have you believe and all people are basically good and will help each other without reward.  Our education means demonstrating to people that technology can actually now be implemented to create abundance. To build a society which can be self-governing and self-regulating. System. These ideas have to be accepted before people can consider socialism as possible.

The United Nations, no matter how ignoble it is used by its member-states’ political motives is one of many global institutions in existence that can viably represent the common interests of all peoples in reshaping the world and becoming part of the administration of the global economic system and the involved in the process of resource-sharing as its basic operating principle. The UN requires the dispensing with the corrupt, divisive function of the Security Council to fulfill its destiny of the World Assembly that we can envision based on genuine cooperation and sharing. The theories and blueprints may well exist, as evidenced in the proposals of many forward-looking policy thinkers and civil society groups, but no-one can predict with exactitude the eventual appearance of a commons-based system of global resource distribution. As humanity comes of age we are tasked to act on behalf of the good of the whole planet on the basis of satisfying everybody’s material needs while promoting the concept of the interdependency of all lands as one village while respecting and preserving the distinct identities of diverse populations with all their manifold cultures.

For those who finds this vision too vague or lacking in technical details, we apologise. When everyone participates in this cause of all causes, this movement of all movements, we will determine clearer what actions we should take in our unwavering concern for the suffering of others. While many shall disagree, no doubt, and many shall remain passive or unmoved by the worsening world crises, we do predict the prospect of millions of people coming together worldwide to prevent the needless poverty-related deaths, and uniting in peaceful protest on behalf of the good of the whole—the One Humanity. Socialism cannot be structured without the embrace and awareness of ordinary people. There can be no socialism throughout the entire world, benefiting every family and individual in equal measure, until we have established a more participatory way of life in our respective societies and the existence of  a preliminary consensus among a significant proportion of the global public who demand free access to planetary resources. Those who realise this are our last hope of averting further social, economic and environmental catastrophe.