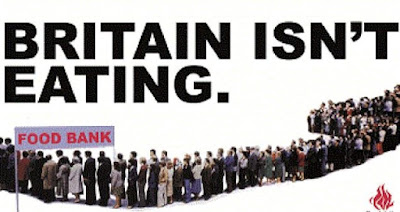 What is poverty?
Many articles and editorials have pointed out the levels and effects of this social disease, poverty.  Corporations relocate their production to low wage countries with “flexible” labour laws are only doing what they have to do to survive. This is what drives wages down and prevents workers from getting out of the poverty cycle. The conclusion is that as long as this system of increasing profits continues, poverty is not only endemic in that system but is actually an unavoidable consequence.

Thus to eliminate the problem is not a matter of political will or morals, or of finding the money. It is simply a matter of who controls the wealth distribution in our society. Once that control passes into the hands of all of society to distribute however we want, then, and only then, will that wealth be used for the common good, including eliminating poverty.

Poverty usually falls into two categories for the benefit of sociologists, government departments and the media: relative and absolute. The former refers mainly to developed nations to identify those people not receiving enough money to provide the basic necessities of life expected in our society for themselves and their families. It is usually calculated as a percentage, 50% or 60%, of the median wage. Absolute poverty is used to refer to many people in the “developing world” who are in life-threatening situations and who require immediate intervention from government or world agencies.

It is worth remarking that, for the vast majority of the time that humans have wandered the earth, hunting and gathering societies were the general mode of producing the necessary goods, and it was rare that these societies experienced starvation. When it did occur, it was entirely due to natural causes such as weather or animal migration patterns, and it affected the whole society equally. It was only with the coming of the first agrarian revolution and the advent of private property that access to the necessities of life became restricted for some.

As class systems developed dividing humans into the oppressors and the oppressed, so did equality and the idea of privileged access to wealth. All the ancient empires—Sumerian, Greek, Roman, Egyptian—had the rich, the free producers, and the slaves, in descending order of wealth and influence. The feudal system, which succeeded the slave system of the empires, operated with the oppressors—the king, the lords, the church, and their entourages—and the oppressed serfs who worked the land to enrich the owners. Marx wrote, “But whatever form [societies] may have taken, one fact is common to all past ages, viz., the exploitation of one part of society by another.” (Communist Manifesto)

Many parts of the world, especially in the “Third World”, continued to function with a mixture of these systems while capitalism was establishing itself in Western Europe. While the more primitive societies were falling behind technologically speaking, and inequality was sometimes a part of their systems, it was again rare that starvation occurred as they were very viable societies in their own environments.

The situation changed radically with the adoption of the capitalist mode of production. Based on private property, large-scale commodity production for profit only, and the exploitation of the worker through the creation and theft of surplus value—that extra value produced by the worker over and above his wage—capitalism introduced a new concept, managed scarcity.

The value of commodities is determined by the amount of socially necessary labour that is put into them—i.e., the amount of labour under average conditions of work by the average worker—but price will vary around that value according to availability. If you want to get the highest price for your commodity, then you control the amount available—flooding the market cheapens the commodity; scarcity raises prices. This is why wheat, for example, is locked away in elevators on the prairies until the price rises sufficiently to make it worthwhile to sell and realize a profit, no matter how desperately it is needed. When the price is high, only the wealthy can partake freely, while the rest make do.

In other words, capitalism is driven by the necessity to get the best price on the market and realize the highest possible profit, which not only gives you more capital to work with, it can also give you a leg up on the competition. The fact that people are starving in the millions is of no consequence to the dictates of capital. This applies to other necessities of life such as housing, health-care, and clean water.

When capitalism reached the less developed areas, it destroyed their local economies by turning cropland into cash crops for the world market and forcing the displaced farmers to become wage earners at the whim of the market and the profitability of the multinational corporations. The ability of the indigenous populations to feed themselves diminished as they lost control of their lands. This vicious cycle is the cause of poverty in the Third World.

Relative poverty in developed nations is also caused by the need to maximize profits and accumulate and attract capital. Capitalism is in a perpetual boom-and-bust cycle. This is because each enterprise decides for itself how they will operate and how much they will produce—the anarchy of production. When the economy is expanding to meet growing demand, the production units must also expand and employ more labour to take advantage of that demand. There is no planned effort by capitalism as a whole to regulate production to match the need. When supply overtakes demand and there is a surplus of goods on the market selling at low prices and reduced profit, factories are closed down, machinery is scrapped, and workers are laid off to await the next boom. Thus a certain number of workers is needed to meet the demands of expansion and then tossed away as production slows. In the meantime, they are unemployed or living on welfare, and if lucky enough to find work, usually it is temporary or at minimum wages. In any case, it is just barely enough to exist. This group is referred to by Marx as “the reserve army” or “the surplus population” and is as necessary to capitalism as wage labour. Marx wrote, “In such cases [of industrial expansion] there must be the possibility of suddenly throwing great masses of men into the decisive areas… The surplus population supplies these masses… Periods of average activity, production at high pressure, crisis, and stagnation, depends on the constant formation, the greater or lesser absorption, and the re-formation of the industrial reserve army or surplus population.” (Capital, The Process of the Accumulation of Capital).

There is another form of poverty that you will not hear about in the media. Whenever a mode of producing wealth for a society is put into motion, a set of relations develops simultaneously between the participants. In capitalism, there develops a set of antagonistic relations between the producers who do not own, and the owners who do not produce. The owners determine what will be produced, when, where, and in what manner. The producers must simply follow instructions and the dictates of capital. All workers are subject to strict parameters set by the owners who employ solely at their discretion.

Here the reserve army plays another role— that of maintaining those relations so favourable to the capitalist class. Marx writes, “The industrial reserve army, during the periods of stagnation and average prosperity, weighs down the active army of workers; during the periods of over-production and feverish activity, it puts a curb on their pretensions,” and, “The overwork of the employed part of the working class swells the ranks of its reserve, while, conversely, the greater pressure that the reserve, by its competition, exerts on the employed workers, forces them to submit to over-work and subjects them to the dictates of capital.” (Capital)

In addition to the subordinate position of those who actually produce all the wealth, the owner takes all the surplus value the worker has embedded in the product—that value the workers have produced over and above their wages; the source of all profit. This legalised theft is supported by the systems of society that are essential to, and support, the current economic system—the state government and its legislation, the court system to uphold the legislation, the military and police forces to enforce it, and the prison system to punish transgressors, and the media to propagandize the whole thing. This means that the class responsible for producing the wealth of society, not only does not own and control its own product, but it is severely limited in the access they have to that wealth.

On the other hand, the tiny minority of owners not only get the lion’s share, but they are able to re-invest the surplus profit as capital to dominate the workers again and increase their capital once more. This constant growth of capital is the reason we see the great and ever-growing gaps in living standards between the multi-millionaires and billionaires who produce nothing, and the workers who struggle to put a roof over their heads, feed their families, pay for health, education, and so on. In this sense, all workers, no matter what their financial situation, are in a state of relative poverty—relative, that is, to what they are entitled to the whole loaf, not the crumbs.

Marx quotes economist James Bray in ‘The Poverty of Philosophy’:
“The workmen have given the capitalist the labour of a whole year, in exchange for the value of only half a year—and from this, and not from the assumed inequality of bodily and mental powers in individuals has arisen the inequality of wealth and power which at present exists around us. It is an inevitable condition of inequality of exchange—of buying at one price and selling at another—that capitalists shall continue to be capitalists, and working men to be working men—the one a class of tyrants and the other a class of slaves—to eternity. The whole transaction, therefore, plainly shows the capitalists and the proprietors do no more than give the working man, for his labour of one week, a part of the wealth they obtained from him the week before!—which just amounts to giving him nothing for something… The whole transaction, therefore, between the producer and the capitalist is a palpable deception, a mere farce: it is, in fact, in thousands of instances, no other than a bare-faced though legalised robbery.”

It can be seen, then, that poverty, relative or absolute, is a natural consequence of the capitalist system. It can be no more eliminated by raising minimum wages, fairer taxation, or income supplements, than an elephant can fly. While we must give credit to the decency of those people and organizations involved in the struggle to improve conditions for fellow human beings, it is tragic that they spend all their time and resources to alleviate a symptom of the problem and nothing at all to eliminate its cause. The effect, like all attempts to reform the capitalist system, is to treat the symptoms and prolong the disease.

Poverty, like many of the ills of our world caused by capitalism, can be eliminated only when we, the producers who do not own, finally realize that the resources of the earth and the products of our labour are the common heritage of all humankind, to be shared freely, as needed, among all peoples of the world. Only then, as Marx said, can we put an end to man’s prehistory and begin man’s history.