Expand your consciousness in Edinburgh 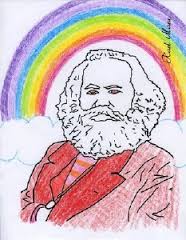 Many critics of socialism will defend themselves from accusations of strawman arguments by saying that there always will be those socialists who will defend socialist theory or practice, by declaring criticism of state-ownership or nationalisation that's not true socialism. We do indeed say that since, in our view, socialism does have a definite historical meaning. The word "socialism" rather becomes meaningless if everyone who calls themselves a socialist is accepted as being a socialist. Maybe the definition of socialism we adhere to is now a minority one, but up until the First World War it was probably the majority view that socialism is a system of society based on the common ownership and democratic control of the means of production, where the state and government over people will give way to democratic self-administration and where the money-market-profit economy, will give way to production solely and directly to satisfy human needs without buying and selling.

To build the foundations for hope in a future for humanity requires ending capitalism. The voice of socialist movement cannot be reduced to a whisper. It has to be clear and firm to be heard and to be echoed. Socialism’s rallying cry is the first sentence of the Rules of the First Workers’ International, drafted by Marx in 1864: ‘The emancipation of the working class must be conquered by the workers themselves.’ Socialism can only be achieved if working people themselves inspire it and create it. Socialism involves workers democratically taking over and running society in their own interests, under their own control. It is a sign of the times that more and more people are discussing the meaning of socialism.