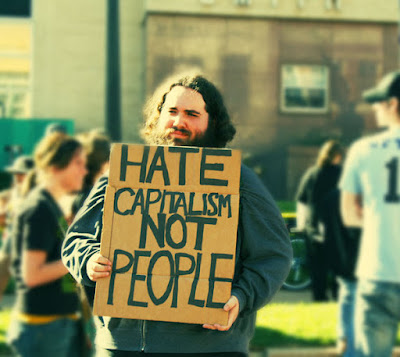 The basic and vital function of all societies is production. What distinguishes one form of society from another is the relationship between men and the means of production. In primitive communities, they belong, such as they are, to everyone; in more complex societies there is class ownership which directs the whole course of man's productive activities and the other activities resulting from them. In capitalism, the social form of the modern world, the means of production - the land, the factories and sources of energy, the machinery, and everything auxiliary to them - are owned by perhaps 10 per cent. of the population. The nine-tenths who remain without ownership live, therefore, by being wage-workers, all more or less poorly paid: they are the working class. There can be no identity of interest between the two groups; under this ownership system the one class is always exploited by the other. All production is carried on for, and all social activity is contributory to, the motive of sale for profit.

On this basis, modern civilisation has developed. With it have also developed the problems which are direct consequences of the universal production of goods for sale. The wars which result from the competition of capitalist nations in the world's markets, and the special problem which a particular weapon of war may impose; the economic crises which recur uncontrollably; the poverty and insecurity from which the wage-earning class is never free; the consequences of poverty in bad housing, ill-health, crime and many other evils. All social and economic problems must, therefore, be related to the organisation of society. Reformers in all fields, including education, fail to understand this and attempt to deal with the effects without touching the social causes. Often, too, the problems are dealt with from the point of view of what is good for “industry” or “the nation.” - that is, the owning class in the nation. What should really be judged is the capitalist system from the viewpoint of the great majority. Human society exists for the satisfaction of human needs, yet capitalism fails to provide a satisfactory life for most people living in it.

All people going to work for wages are selling their labour-power; the price of this depends, as does the price of every other commodity, on the labour that went into its making. Thus, a professional person or a skilled technician's labour-power (subject, of course, to market conditions) commands a relatively high price because it embodies other people's skilled labour in education and training; an unskilled workman's labour-power, on the other hand, has only a: low price because it is essentially a cheap product. From this economic point of view, the school under capitalism resembles a factory in which materials are tested, classified and put through processes which will mould them into finished products for the market ranging from the cheap, mass-produced to the costlier high-grade article. In practice, it cannot, fortunately, be as mechanistic as that because the material is human, but the view is not far removed from the capitalist one. The owning class at times is prepared to pay heavily and foster education to have its own requirements met; at other times and when there are other priorities, the education system may be subject to abridgements and economies. The granting of education and facilities for learning to the working class, even though it is for someone else's reasons, is of immense value. Within the framework of elementary education, there have been many improvements and additional benefits over the years. These, however, have resulted from the increased complexity of capitalism that has demanded more knowledge and more economic participation from even the least skilled worker, and so necessitated a widening of his or her education.

The aim of the Socialist Party is to bring into being a society in which not only will the problems and privations of the present-day world be absent, but every person will lead a free and satisfying life. What is wrong with our society is its basic condition of ownership by a class; the answer, therefore, is to establish a new social system based on the ownership by everybody of all the means of production. Such a society has not yet existed, though there has been much confusion about it because of the play with the word “socialism” made by reformers, the Labour Party and 'social-democratic' parties, and admirers of the former Soviet Union’s state capitalism. Socialism means that all people will have the same relationship to the means of production. Everyone will take part as he is able, in the necessary work of society; there will be no money, and everyone will have free access – will, in fact, own - all that is produced. Thus, there will be neither exploitation nor competition, and social activity will take new forms when no person is compelled to serve another's interests. The conditions needed for its establishment are with us now: the development of the means and methods of production that could create abundance if the profit motive did not stand in the way. All that is lacking is people to bring it to being. Thus, the concern of socialists under capitalism is education - showing the facts about capitalism, and the only answer to the problems which it causes.  Here, then, is the great need of today: people to make a different world. People, that is, who have looked at capitalism critically and seen that it has long ceased to be useful to mankind, and that socialism is wanted now
By ajohnstone at November 18, 2016