On with the Fight 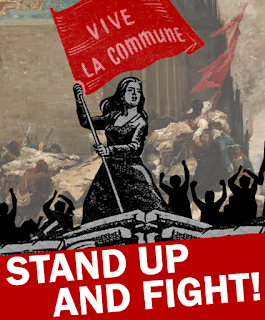 Socialists do not depend upon what Marx said but apply Marxist principles to each set of circumstances as it arises. “So said Marx” is anti-socialist. Socialists constantly examine and re-examine whether we are fighting in the interest of the wage-earning class. We oppose reformism because it leads to a patchwork of palliatives rather than to the class struggle ending in the revolution of the propertyless against the owning class which must inaugurate socialism. The Socialist Party strives for nothing short socialism because we believe that nothing short of that will save the workers. The aim of The Socialist Party is to foster class awareness because we contend that the productive forces of humanity have outstripped the capacity of the current relations of production (their control by a tiny minority of capitalists) to deliver that productive capacity for the benefit of the vast majority of people who do not own the means of production (the working class). The Socialist Party calls upon our fellow-workers to control production and distribution by socially owning the means of production. What the workers have to learn is that the only real practical work for the people is the transformation of capitalism into socialism. We all know that to get mass action and make it effective in the interests of the workers we must have preliminary agitation, education, and organisation.

The Socialist Party insists that economic organisation is subsidiary to political organisation in that the workers here, having the completest basis of unity, are better able at once to form a party representative of the interests of the workers as a whole. We hold that socialisation of wealth-producing property cannot be accomplished by the direct seizure of the factories and the land by the unions or union. This method denies the need for politics and the capture of the State machine. It is our duty, then, to foster confidence in class solidarity, co-operation, and socialism. Essentially, we offer our fellow-workers ample opportunity of voting “class” at every election. The worker who votes for a representative of capitalism can hardly be trusted to sustain the economic struggle. Hence the continual necessity for political action as the best agency for fostering nascent class solidarity. The salvation of society rests not in the hands of a few (leaders or heroes), but in those of masses of mankind when the workers will challenge capitalism to the last fight and win through to the world society of a united human race, producing each for all and all for each.

The world as it exists does not satisfy human needs. We aim at replacing private ownership of the means of life by common ownership. We aim at production solely for use, which means the abolition of rent, interest, and profit. Further, of course, we are international. Socialism is itself an international conception and there can be no such thing as socialism in one country and, incidentally, of course, since we claim that capitalism is the cause of war, we believe that socialism, and socialism only, will get rid of that conflict of interest, that drive for markets, that striving for areas of raw material and strategic points, and so on, which are the causes of war. It is implicit in the position of the Socialist Party that socialism is not state capitalism, that the mere state ownership and control of transport, industries, and so on, is not socialism; it has nothing to do with socialism and will not bring us towards socialism. The only basis for socialism is the common ownership of the means of production and distribution and the production of goods and the operation of services, not for the purpose of making a profit, but solely for the purpose of meeting the needs of the population of the world. Socialism isn’t just a justice movement or environmentalist movement — it’s a movement for the future of humanity.

Protests can bring a city to a halt, even a nation. They can temporarily thwart the actions of a government. But on its own, protests and demonstrations cannot create lasting social transformation and build a new society.

Once workers study economics as expounded by Marx they begin to understand that they are robbed of the major portion of the wealth they play an essential part in producing and distributing, the kernel of which is the labour-time theory of value. That theory states the worker sells on the market his labour-power and is not and never will be paid “by results”; that is to say, by the total wealth or value-equivalent of what he produces. His wage is paid on “the cost of living”, and his cost of living is far less than the wealth or the value he contributes to the world’s stock. Marxian economics stand or fall with the labour-time theory of value.

The goal of the Socialist Party is the common ownership of everything to administered by the chosen delegates of the workers via various elected committees and bodies. The control must be in the hands of the workers only each community and industry sending delegates to district councils and then on to regional and global councils. Only when the world is run by the workers of the world for their own benefit, and not for the benefit of the capitalist class, will security of livelihood be obtained. That is why we are socialists. To convert capitalism into socialism through revolution. We object to the existing form of society, known as capitalist society. Why? Because a few people own the world and the factories and machinery of wealth production. These are the propertied class. Most other people have to sell their brain-power or body-power, in short, their labour-power, to this class for a return in money called wages. This class is the wage-earning or the wage-slave class. Wages are not based on the money value of the goods produced or services rendered by the slave-class, but on the cost of living.

Robbery of the workers is the root of all the workers’ troubles. The only possible hope of the working class is common ownership of the means of production. The clinging to capitalism, the ownership of the world by a small propertied class, is driving the people of this planet swiftly along the path to perdition. Capitalism is crushing workers in competition, strife, and bloodshed. In the wake of its path of destruction hundreds of millions of helpless people are being squeezed by a growing poverty. The hope of humanity and progress lies in the revolt of the wage-earners against the propertied class, the capture of political power from the propertied class, and the appropriation of the land and the means of production from the propertied class. This constitutes the social revolution. This great change means that the people will own the world in common, produce wealth in common, possess in common all wealth produced, and by common agreement distribute that wealth to the common advantage. When this task is carried through the social theft of class from class shall end forever, and with the end of plunder, the militaries no longer shall be required, and social murder or warfare shall vanish forever. This next form of human society is called socialism/communism/anarchy/cooperative commonwealth/industrial democracy.
By ajohnstone at November 28, 2016