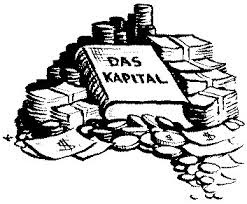 What is the ultimate source from which the landlord derives his rents, the industrialist his profits, and the banker his interest?

The property-owner knows that he receives rent from his tenants, whether those tenants are factory owners, farmers, or home-occupiers. The factory-owner knows he receives his profit from the sale of the goods produced by the workers employed in his factory. The money-lender knows that his interest likewise comes also ultimately out of the proceeds of the sale of goods. Likewise, the worker who rents a house is able to pay the rent only because his employer has sold goods and can pay wages out of the proceeds of past sales of the goods the worker produced for him. Ultimately, therefore, all forms of income arise from goods produced for sale.

What is it that gives goods of all kinds a value and enables them to be sold at their appropriate prices which provide both for the wages of the workers and for the profits, rent and interest of the propertied class? The explanation is that commodities have values which arise from what Marx termed the “socially necessary labour” embodied in them. To take a simple explanation, a bicycle worth £100, a suit of clothes worth £100, and a certain weight of gold worth £100, all have the same value because the amount of labour required in their production is the same. (The selling price of an article may in practice deviate from value, and secondly only that labour is value-producing which is “socially necessary” labour)

There is one commodity which has two peculiar features. This commodity is the “labour-power”, the physical and mental energies of the worker. Its first peculiar feature is that it is possessed by the working-class who, apart from this, have no commodities to sell. Not having any other commodity to sell, the worker has to obtain his livelihood by selling his “labour-power” to the capitalist, by the hour, day, week or month as the case may be. Like other commodities, it has a value, which is proportionate to the amount of labour required for its production; which means the amount of labour required on an average to produce the food, clothing, shelter, etc., of the worker and his dependents. Under the different climatic conditions of different countries and the different conditions of different occupations the worker requires differing amounts of means of subsistence, but this is a qualification which need not detain us in considering the simple elements of the position.

The second peculiar feature possessed by the commodity “labour-power” is that it has the quality of being able to produce a value greater than its own. When the worker expends his labour-power by working on the employer’s raw materials he is capable of adding a value greater than the wage he is paid, or in other words a value greater than the value of the food, clothing, etc., that he consumes. In a working week of six days, for example, the worker may be working, say, three days producing value equal to the value of his means of subsistence (his wages), but in the remaining three days, he will continue to work producing value which is retained by the capitalist. This “surplus value” is the source from which all forms of property income, all profit, rent and interest are derived.

This, then, is the answer to our question. The property income of the capitalists, like the income of slave owners in former times, is derived from the exploitation of the workers. The workers are carrying on their backs the whole of the propertied class.

It may seem that the contract between employers and employees is just like any other bargain entered into voluntarily, as, for example, the contracts between capitalists when they buy and sell commodities. The wage contract however only appears to be free but, in truth, it is forced. The capitalists, because they are the owners of property and their ownership is endorsed by law and protected by the State, can impose more or less their own terms when they bargain with the property-less working-class. They are able to do so for the reason that the workers are always only a short distance from destitution. The workers must accept more or less the terms that are offered because otherwise they face unemployment and have not the means to hold back for more than a short time. The workers’ bargaining position is helped but necessarily to a limited extent only, by trade unions.

A slave owned by a slave-master, knew very well that he was labouring to provide for the slave-owner as well as himself. He did not imagine that he was entering into a voluntary arrangement. Similarly, a serf, obliged to work unpaid for the Lord of the Manor could clearly see that he was being robbed and exploited. To-day exploitation takes the form of “wage-slavery”.

Defenders of capitalism do their best to argue that their incomes arise from sources other than the exploitation of workers. They talk of the thrift and self-denial of the capitalist. They talk of their own long hours of “work”, and that they are indispensable as “supervisors” and “organisers”. They make much of their superior business knowledge and entrepreneurial skills. Or that they are inventors and discoverers.

But at the end of it all, the propertied class provide the facilities and the instruments of they allow the working-class to produce and operate them – on condition that the workers agree to their own exploitation, working part of the week to produce the equivalent of their wages and the rest of the week creating surplus-value which is the source from which all the sections of the propertied class derive their profits, rent and interest.
By ajohnstone at November 09, 2016